A look at drought category change during the past 12 months supports the idea that 2022 was a very dry year in the midsection of the United States. And that, in turn, has led to a sharp intensifying of drought in the Great Plains and the western Midwest. According to the U.S. Drought Monitor, the past 52 weeks through Dec. 13 saw drought degradation of up to five categories in Nebraska and Kansas. That intensifying drought coincides with more than half of those two states (58% in Nebraska and 57% in Kansas) judged as having either Extreme or Exceptional Drought in effect as of early December. Elsewhere in the Plains and western Midwest, drought intensified by as much as three categories.

Precipitation statistics show that 2022 was simply a year without much moisture. Drought Monitor analysis notes that since March, the western half of Kansas saw precipitation deficits that ranged from 3 to more than 12 inches. In west-central Minnesota, the last half of 2022 was so dry that precipitation deficits ranged from 9 to 12 inches. The NOAA U.S. November climate report cites the meteorological autumn season (September-October-November) as the fifth driest on record in Nebraska. Nationally, the NOAA report notes that U.S. autumn precipitation total was 5.92 inches, 0.96 inch below average, ranking in the driest third portion of the September-November record.

This extent of dryness adds importance to the potential for moisture in the big storm system moving through the north-central U.S. The forecast storm track places heavy snow of up to 2 feet in the western and northern Plains, including some of the driest areas. This chance for soil moisture improvement will be closely watched going through the rest of the winter season.

Drought intensifying is a growing worry in the areas that are most affected. A survey of rural Nebraska residents conducted by the University of Nebraska-Lincoln agricultural economics department found that 55% of the respondents indicated concern about more severe droughts. It's the highest level of drought-related concern since the survey began 27 years ago.

There have been some regions with drought easing in the past 52-week period. A notable example is in the northern Rockies, where drought is assessed as easing by as much as four categories since early December 2021. Much of that easing also came in the form of flooding during the month of June. And in the Far West, the snowpack in California is starting the winter on a positive note. The snow water equivalent in the California mountains is reported at 171% of normal statewide as of Dec. 6. The northern Sierra Nevada mountains were recorded at 156% of normal for snowpack, the central Sierra at 160%, and the southern Sierra at 203% of normal.

The Pacific Ocean sea surface temperature and atmospheric circulation, a major driver of the large-scale weather patterns in North America, is still in a La Nina phase with below-normal sea surface temperatures in the equatorial Pacific between South America and the International Date Line, and a sustained easterly trade wind as indicated by the Southern Oscillation Index (SOI). La Nina is forecast to gradually weaken during the winter season, which suggests a chance for a more-active pattern in the central U.S. during the first three months of 2023 and a possible swing back from deep drought to at least some soil moisture recharge. 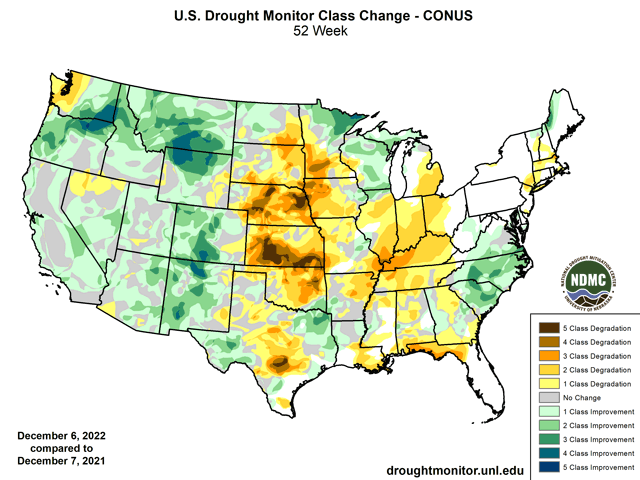