The September climate report from the National Centers for Environmental Information (NCEI), a division of NOAA, points to temperatures that were far above normal, very dry conditions, and the occurrence of hurricanes that caused damage of more than one billion dollars. Here are some highlights from the report:

The average temperature of the contiguous U.S. in September was 68.1 degrees Fahrenheit, which is 3.2 deg F above average, ranking fifth warmest in the 128-year record. Generally, temperatures were above average in the Great Lakes to the Northeast with record warmth across much of the West.

The U.S. has experienced 15 weather and climate disasters each incurring losses that exceeded $1 billion this year. This is also a record eighth-consecutive year where the U.S. experienced 10 or more billion-dollar disasters.

Hurricane Ian made landfall in Florida on September 28 as a strong Category 4 hurricane resulting in major flooding, damage and loss of life. Ian created additional damage as it made landfall in South Carolina as a Category 1 hurricane.

Hurricane Fiona brought massive flooding and structural damage to Puerto Rico on September 18, with some areas receiving 12-18 inches of rain.

Remnants of Typhoon Merbok pounded Alaska's western coast on September 17, becoming the strongest storm to enter the Bering Sea during September in 70 years.

In early September, nearly 1,000 heat records were broken over the western United States.

According to the September 27 U.S. Drought Monitor report, about 50.9% of the contiguous United States was in drought. Severe to exceptional drought was widespread from the Great Basin to the Pacific Coast, across portions of the Great Plains, and in Hawaii, with moderate to severe drought in parts of the Northeast.

For the July-September period, the average contiguous U.S. temperature was 73.0 deg F, 2.8 deg F above average, ranking as the warmest on record for this 3-month period. Temperatures were above average across most of the contiguous U.S. with record warmth blanketing much of the West. California, Nevada, Oregon, Washington, Idaho, Montana, Wyoming, Colorado and Utah each had their warmest July-September period on record. Seven additional states experienced a top-five warmest event for this three-month period.

The U.S. has sustained 338 weather and climate disasters since 1980 where overall damages/costs reached or exceeded $1 billion (including CPI adjustment to 2022). The total cost of these 338 events exceeds $2.295 trillion.

Previous Post (What Does It Take to Get Out of Drought?)
Next Post (Upper-Air Pattern Flipping Next Week: What's the Cause?) 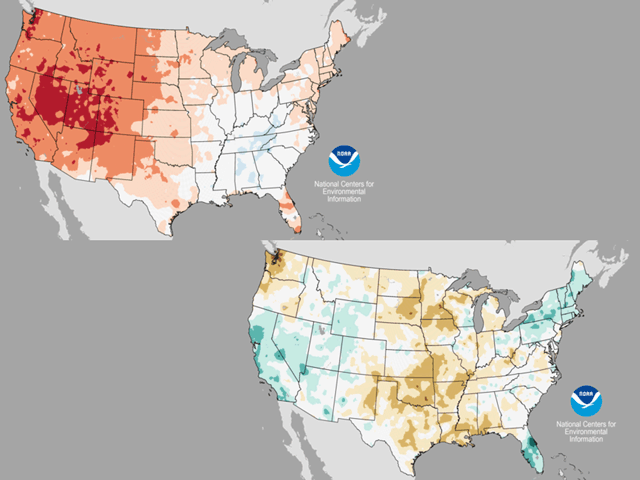