As I drove my kids to swimming lessons on Oct. 9, I noted that on our 20-mile drive through rural Scott County, Minnesota, all but one soybean field had been harvested. There was a combine going to work in that field when we were on our way home. Corn was a different story, as only a couple of them were done out of the dozen or so that line our route, but still, it is good progress. It is not just in my area -- harvest weather has been very favorable for most of the U.S. so far in September and October.

The weather pattern has been a little active, but has not had the big storm systems that come through during the fall season with their large rain shields of soaking moderate rains. Instead, it has been a lot of isolated showers or smaller clusters of thunderstorms for the most part. Along with regularly above-normal temperatures, crops have matured well, even when planted late this year.

There was a strong burst of cold air that moved through over the past weekend, where widespread frosts and freezes occurred over the Corn Belt. It likely resulted in a killing frost for the remaining immature corn and soybeans. The USDA NASS Crop Progress Report issued Oct. 11 noted that 87% of corn was mature and 91% of soybeans were dropping leaves. For most states, the frosts may have had some limited effect, but not much. However, the states of Illinois, Michigan, Ohio, and Pennsylvania were all sitting around 70-75% mature for corn. Kentucky was still at 70% dropping leaves on soybeans. So there may have been some more significant damage in some of these states. But with growth now likely over, it is game-on for farmers to harvest as the conditions allow.

This week, there may be some challenges as a series of cold fronts move through the country. Unlike previous fronts, these have a little more access to moisture and will result in more areas of scattered showers and thunderstorms. The strength of the fronts pushing through could also lend to some severe weather at times with these fronts. This is not uncommon during the fall season with dramatically changing temperatures ahead of and behind these fronts.

As I write here today on Oct. 11, a larger area of showers has moved out of Missouri and into Illinois and should cause some delays there. A cold front is moving through the Northern Plains and forecasts suggest it will light up with a line of thunderstorms by this evening from about Omaha to Minneapolis and a bit farther north and south on each end. That front will continue southeast through the Corn Belt on Oct. 12 and be followed up by another front pushing through about 12 to 18 hours behind the first one. The second one will have fewer showers, but bring in some colder air to replace the readings that are widespread in the 70s and 80s Fahrenheit this afternoon.

A shot of reinforcing cold air will come through this weekend into early next week. This will be the coldest air we have seen this season with frosts potentially getting down to the Gulf Coast. It is not likely to be as cold in the Plains, but widespread frosts and freezes are expected yet again across the Corn Belt. As the front hangs up in Texas, it will likely light up with more showers for Texas and Oklahoma and parts of the Gulf Coast as well early next week. The rains will be good there in the south, but most of Kansas and Nebraska will see little precipitation through this active period, compounding drought issues and winter wheat establishment.

The culprit in this weather pattern is a ridge of high pressure that has migrated out to the western side of North America. With nothing in the way across the eastern half of the continent, disturbances that ride over from Russia go up through Alaska and northwest Canada, picking up much colder air, then deposit that cold air across the eastern half of the country and dive southeast.

The ridge has been a consistent feature over the last ten days and will be for the next ten days, but that ridge is not going to stay stationary for long. The ridge is forecast to shift eastward into the middle or eastern U.S. for the last full week of October and a trough of low pressure will take its place on the West Coast. That should do two things. One, it will mean the end of colder temperatures for the eastern half of the U.S., though how warm it will get is questionable. And two, the trough in the West will possibly bring chances for storm systems to the western half of the country that has been on an incredibly dry stretch going back to last year. That also could mean wetter conditions in the middle of the country as well. We will have to see how it all unfolds. How long this pattern lasts before it switches back to our more familiar pattern of a ridge in the west and trough in the east is also up for debate in the models.

Depending on your perspective and your goals, the change in pattern could be a good thing or a bad one, as is often the case when discussing the weather.

John Baranick can be reached at john.baranick@dtn.co

Previous Post (La Nina-Enhanced Drought Fuels Nebraska Wildfire)
Next Post (What Does It Take to Get Out of Drought?) 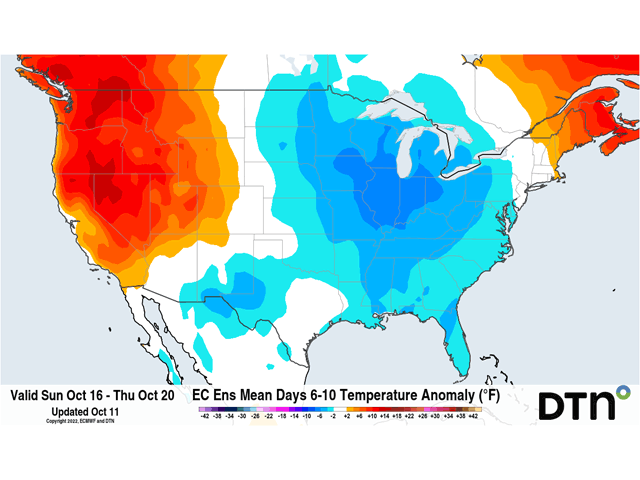