The tropics are starting to heat up in the Atlantic Basin. After a record-long period from July 3 to Aug. 31 with no named tropical disturbance, Tropical Storm Danielle formed on Sept. 1 and later became a hurricane as the first one of the season. This is the latest that the Atlantic has seen its first hurricane since 2013. This is also the first year that there has not been a named storm in August since 1997.

That all comes after meteorologists were forecasting a busy 2022 season with a lot of named storms. La Nina and climate change were the factors that heavily influenced those forecasts, but in-season challenges including Saharan dust, cooler Atlantic waters, and unusually high wind shear have kept the tropics much quieter until the turn to September.

Now, a second-named storm, Tropical Storm Earl, has formed north of Puerto Rico and will make a pass, perhaps as a hurricane, near Bermuda. There are two more features near Africa that the National Hurricane Center is focused on as well. But none of these has the potential to affect the U.S.

Tail ends of cold fronts are always needing to be watched if they linger into the Gulf of Mexico or off the Southeastern coastline. They could produce another named system. Otherwise, the Gulf of Mexico looks rather quiet for the time-being.

Despite the lack of named storms, it is not like the Gulf of Mexico has been inactive, however. Two non-named tropical lows moved through the southern reaches of the country in mid-August that produced heavy rain from Texas to Alabama. Another low developed off of a stalled cold front in Texas last week and pulled plenty of tropical moisture up from the Gulf of Mexico into the Ohio and Tennessee Valleys up into the Northeast over Labor Day weekend, leading to some limited areas of heavy rainfall and flooding.

The lack of named storms is surprising to those folks that were forecasting higher numbers of storms and hurricanes. A typical hurricane season in the Atlantic has about 14 named storms (tropical storms plus hurricanes) and seven hurricanes. Through Sept. 6, we are sitting at just five named storms and one hurricane, though Earl has the potential to make it two shortly. We are currently in the peak hurricane season in the Atlantic, with the climatological tip of the peak on Sept. 10. Getting into early October is when the season really starts to wind down, so there is time for the numbers to come up. The recent awakening could be the spark that fuels a more feverish pace to the season that forecasters were suggesting.

Hurricanes do not form solely in the Atlantic Ocean. The Eastern Pacific Ocean has been on a normal pace this season. Typically, storms that form off the coast of Mexico or Central America rarely affect land, but do on occasion move up through the Gulf of California and into the desert southwest. Outside of monsoon showers, that is the best way to get widespread rain into the deserts outside of the winter season. These storms weaken considerably either due to interaction with land or moving over colder waters that come down the California coast.

One system though, Hurricane Kay, is a potential for change. Southern California has been in an extremely dry pattern for the last several years, mostly because of La Nina conditions. But Kay, which is currently off the west coast of Mexico, is forecast to move up the Baja Peninsula and toward the southern California coast around Sept. 9-10. Indeed, the waters here are quite cold for hurricanes and model forecasts mostly dissipate the storm center, never fully reaching California, but bands of rain from the decaying storm may move up into the desert. Outside of some potential flooding, the rains would be good for these areas in severe drought. Rains are not expected to get into the Central Valley of California, however, where exceptional drought is the most widespread in the country according to the Drought Monitor. Otherwise, it may be a while before another named system affects the U.S. Mainland. 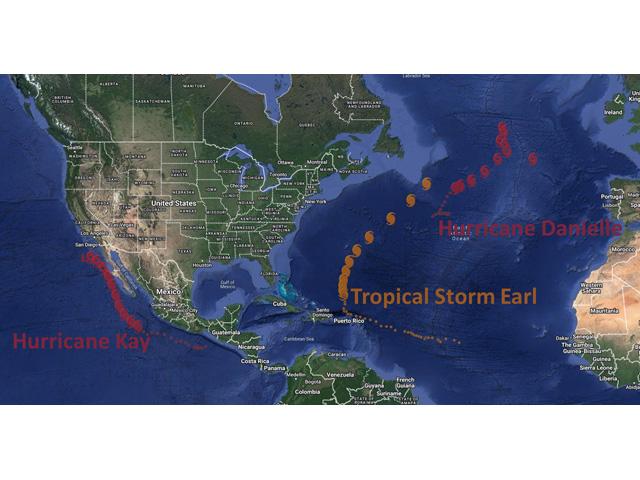