With planting delayed by several weeks this year, September is more of an important month for precipitation than in most years -- especially with regards to soybeans and especially early in the month. Unfortunately, on the first day of the month, the forecast calls for above-normal temperatures (sometimes significantly) and below-normal precipitation for all but the far South.

There are always caveats to any long-range forecast, especially one that covers an entire month, so let's discuss what may occur each week.

The first week of September does look very hot and dry. A ridge of high pressure is building in the West and spreading across much of North America. A small trough will move through Canada and that could bring some isolated showers to the Corn Belt Friday and this weekend; otherwise, the Corn Belt is not going to see much precipitation. That will all be down in the far South from Texas to the Southeast. A front this week has stalled down there and will be very active going into next week. A weakness in the ridge there will mean more opportunities for showers and thunderstorms to develop, a large reason why the whole month should trend to above-normal precipitation in that part of the country.

For the second week of September, we'll see a small change. There will be another trough move into the Pacific Northwest by the end of next week and push along the U.S.-Canada border through that weekend and the following week. There should be enough energy there to produce a storm system, but DTN Long-Range Weather Risk Communicator Nathan Hamblin noted this would likely only offer brief regional relief.

"There will probably be a front in advance of a cooler shot, which could bring some rain to the Corn Belt," Hamblin said. "But it's difficult to imagine that widespread meaningful rains will occur." He also noted the cold shot does not look particularly bold and is more likely to bring temperatures closer to normal instead of below normal, which would cause any potential for frosts.

For the last half of September, Hamblin said, we may not see anything to disrupt the broad ridge pattern until Oct. 1, keeping the heat going for the rest of the month. Drier conditions should also be in play.

Thunderstorms associated with the Madden-Julien Oscillation (MJO), a wave of enhanced thunderstorms that travels eastward along the equator, have the potential to shift that ridge covering North America out of the way. Hamblin noted, "We have to get rid of that convection in order to meaningfully change the pattern." But forecasts do not show that potential through the end of the month.

One thing that could throw a wrench into the drier and hotter forecast would be tropical systems. The Atlantic basin has been very quiet this year despite earlier forecasts for an active season and increasingly beneficial conditions for tropical storm development in the last half of August.

But named storms are not the only hazard. Even tropical disturbances that do not get named can bring tropical moisture into the U.S.

We saw that in late August where a stripe from Texas to Alabama received heavy rain as two tropical features came together. Several tropical features are moving west through the Atlantic and a couple have high probabilities to become named.

They may not affect the U.S. directly, but features continue to move westward through the Atlantic as the peak of hurricane season continues through September. Each will be watched for potential to produce heavy rain over portions of the country that would certainly take it as crops are still filling in many areas. 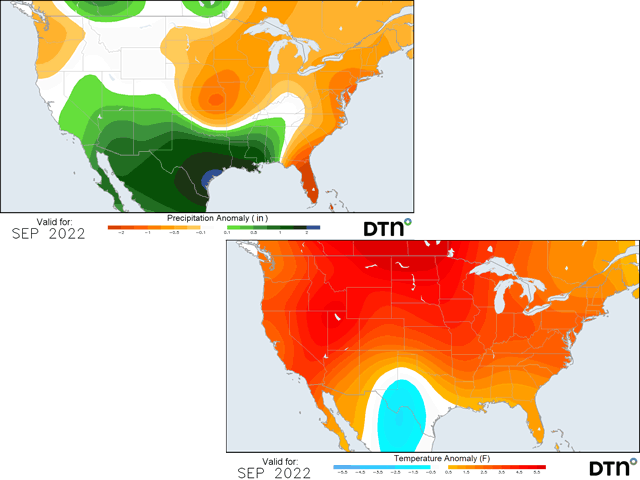