The Jan. 14-15, 2021, eruption of the Hunga Tonga-Hunga Ha'apai submarine volcano in the Pacific Ocean was truly one for recent history notation. The blast had a force greater than an atomic bomb; created tsunamis throughout the Pacific Basin, including the U.S. West Coast and Russia; and sent shock waves multiple times around the world.

The explosion was so strong its booms were heard as far as 6,000 miles away in the Yukon Territory in northwestern Canada. Tsunami damage was extensive in the island nation of Tonga and the immediate region. Tsunami waves also resulted in fatalities as far away as the coast of Peru in South America and caused some severe property damage in Hawaii.

There are also questions about whether the ash cloud and particulates from this big eruption could be far-reaching enough to affect the global climate and, in turn, possibly the upcoming growing season for U.S. agriculture.

The Hunga Tonga eruption was a major event; it is estimated to be the largest volcanic eruption since the eruption of Mount Pinatubo in the Philippines in June 1991.

Hunga Tonga certainly blew its top; the first eruption on Jan. 14, 2022, sent ash clouds 12 miles high into the atmosphere. A second eruption on Jan. 15, was even stronger, sending the eruption cloud possibly 34 miles high. An estimated 400,000 metric tons (444,444 short tons) of sulfur dioxide gas was injected into the stratosphere from the Hunga Tonga eruption.

However, even with the force and volume of discharge involved, Hunga Tonga is not expected to have anything close to the impact on the atmosphere that Mount Pinatubo had during its eruption event in 1991. Mount Pinatubo blew up on June 15, 1991, with the second-largest volcanic explosion in terms of scientific recordkeeping.

The Wikipedia description of volcanic material that was shot into the atmosphere is astounding: "It ejected roughly 10 billion tonnes (1.1 x 1010 short tons) or 10 km3 (2.4 cubic miles) of magma, and 20 million tonnes (22 million short tons) of sulfur dioxide, bringing vast quantities of minerals and toxic metals to the surface environment. It ejected more particulate into the stratosphere than any eruption since Krakatoa in 1883."

Haze from the huge injection of sulfuric acid led to a definite world temperature effect. Analysis of global temperatures shows a decline of almost a full degree Fahrenheit from 1991-93 due to the sulfur dioxide haze from Mount Pinatubo's eruption. Along with the cooling, cloud seeding from the Mount Pinatubo particulates may have contributed to a rainy growing season in the U.S. Midwest in 1992 and a catastrophic wet year with extensive flooding in 1993. In that year, U.S. corn production dropped by a full one-third to only 6.34 billion bushels (bb) after a then-record 9.48 bb in 1992. Flooding impact also led to government payments for Prevented Planting as spelled out in H.R.2579-103rd Congress (1993-94). So, the Mount Pinatubo event could quite possibly have contributed to a crop insurance component that has been used frequently during the last several years.

The Hunga Tonga eruption, powerful as it was, did not load up the atmosphere with volcanic matter on the order of the Mount Pinatubo event. But its harsh regional impact and reference to another cataclysmic event serve as reminders once more of the tremendous forces and laws of physics constantly in action on land and in the sea and sky. 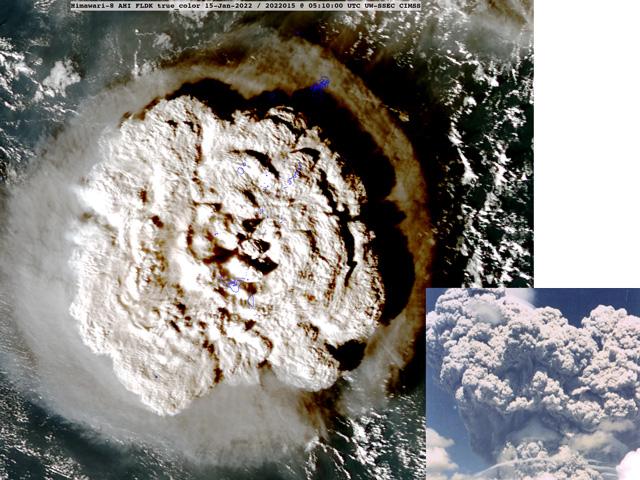