USDA's weekly Agriculture in Drought report keeps a prominent note of caution in play when it comes to assessing the moisture conditions for the 2021 corn crop. The report, with conditions as of May 25, identifies 24% of the U.S. corn acreage in some phase of drought. Drought categories are: Moderate Drought; Severe Drought; Extreme Drought; and Exceptional Drought. Those correspond to levels D1-D2-D3-D4 on the U.S. Drought Monitor. The Drought Monitor D-zero, Abnormally Dry, category is not part of the Agriculture in Drought report parameter.

Outside of the central U.S., 70% of North Carolina's corn acreage is listed in drought and 14% of the Texas corn acreage is classified as having drought in effect -- which includes 10% in either Extreme (D3) or Exceptional (D4) drought. In the northwestern U.S., all the corn acreage identified in production reports is in drought.

The fact that Abnormally Dry (D0) conditions are not included in this report is significant, because there were several areas in the northern Corn Belt which were placed in the D0 status as of May 25. That means the drought acreage number could potentially increase in the next report.

Forecasts through the first few days of June have only light rainfall for the northern Corn Belt states. The total amounts indicated run mostly from 1/10 to 1/2 inch. Daily evapotranspiration amounts are around one-quarter inch for these northern states; thus, the forecast suggestion is for continued drying and little to no significant crop benefit. 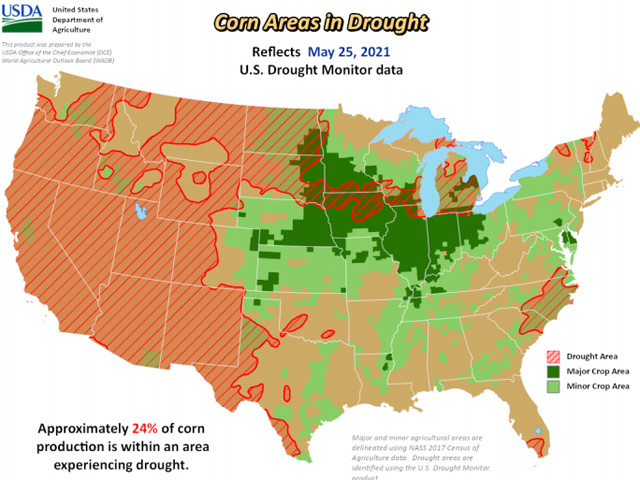