OMAHA (DTN) -- Each year, DTN publishes our choices for the top 10 ag news stories of the year, as selected by DTN analysts, editors and reporters. Today, we continue the countdown with No. 3, looking at the impact of extreme weather on crop production. 2020 U.S. crop production was large, but yields were lowered significantly from early projections due to extreme weather effects including drought and derecho windstorm damage. A record hurricane season caused notable regional damage as well.

The year 2020 began with widespread expectations for large crop production following record wet conditions in 2019. Ample soil moisture in most primary crop areas was generally viewed as offering a generous buffer for crop water needs in the event of a dry spell.

However, eventual harvest estimates were notably lower than the projections. There were several factors: the lingering impact of 2019's wetness; the formation of a La Nina Pacific Ocean climate event in midsummer; and a catastrophic derecho windstorm in the Midwest on Aug. 10, which reached hurricane level intensity. Together, they shaved yields considerably from the forecasts early in the year.

Prevented planting -- a center-stage feature in the flood year 2019 -- was still around in the northern growing areas in 2020. Heavy snow and wet soils contributed to a 43% decline in the North Dakota 2020 harvested corn acreage versus 2019. This loss of planted area increased crop declines from the weather pattern's evolution elsewhere during the 2020 growing season.

Aug. 10, 2020, was the day crops literally got blown away. A powerful derecho windstorm formed in southeastern South Dakota and northeastern Nebraska and tore through the Midwest; seven states were affected by this event.

The storm destroyed crops, especially corn, along with grain storage facilities and trees, and caused extensive power outages. Damage was by far the worst in Iowa; central Iowa wind speeds exceeded 100 mph, meaning the storm attained hurricane strength. The World Meteorological Organization noted that the derecho destroyed or damaged crops on 5 million acres. The total loss from the derecho is estimated at $7.5 billion.

Summer 2020 was also a summer of drought. The initiation of a Pacific Ocean La Nina event may have contributed to drought development. Equatorial Pacific waters off the South America coast cooled to the La Nina threshold value of 0.5 degrees Celsius below normal during July.

La Nina is the term used to identify the coupled ocean-atmosphere phenomenon that is the colder counterpart of El Nino, as part of the broader El Nino-Southern Oscillation climate pattern.

In the central U.S., summer temperatures averaged 1 to 4 degrees Fahrenheit above normal, with precipitation less than 75% of normal. August was especially dry. Iowa had its third-driest August on record; the southwest Iowa crop district had a record-dry August; Illinois logged its 13th-driest August.

As harvest reached its final stages in November, USDA production estimates showed the impact of these summer developments. In August, USDA estimates called for record corn production of 15.3 billion bushels (bb) with a record yield of 181.8 bushels per acre (bpa), and a record soybean crop of 4.42 bb with a new soybean yield record of 53.3 bpa. (August input data was collected prior to the derecho.) By November, the corn production estimate had dropped by 800 million bushels (mb) or 5% to 14.5 bb, and the soybean crop size shrank by 250 mb or 6% to 4.17 bb -- both numbers shy of new records. Corn yield likewise pulled back to 175.8 bpa with the soybean average yield falling to 50.7 bpa.

2020 also featured record hurricane activity. The 2020 Atlantic Basin hurricane season was the most active and seventh costliest on record.

This was the fifth straight year for above-average Atlantic hurricane activity from 2016 on. A total of 30 named storms formed in the basin, which ties 2020 with 2005 for the record. Total hurricane damage is estimated at $41 billion. Hurricanes also claimed the lives of at least 436 people.

Thirteen hurricanes formed, with six reaching major hurricane status. A record 10 hurricanes were noted with rapid intensification, tying the total set in 1995. So many storms formed that identification was forced into using the Greek alphabet for only the second time. Producers along the U.S. Gulf Coast sustained damage and harvest disruptions.

Meanwhile, Central America was devastated by late-season hurricanes Eta and Iota. In Honduras, damage from Eta and Iota is estimated at more than $10 billion, or about 40% of the entire Gross Domestic Product of Honduras.

As the year ended, the entire ag industry shared concern about the continued impact of La Nina. La Nina is forecast to enhance drought in the Southern Plains and western Midwest while bringing wet conditions in the eastern Midwest.

In South America, late-year 2020 crop estimates were already being reduced in Argentina due to expected dryness from La Nina. These concerns indicate industry nervousness already about crop size in 2021; a far cry from the generally hopeful tone prior to the whiplash of 2020.

A video of DTN Senior Ag Meteorologist Bryce Anderson's weather summary of 2020 and outlook for 2021 is available to those who registered for the DTN Ag Summit on the Ag Summit digital platform at https://dtnagsummit.psav.live/…

There is still time to register and catch all the DTN Ag Summit content through Jan. 8. at dtn.com/agsummit2020. 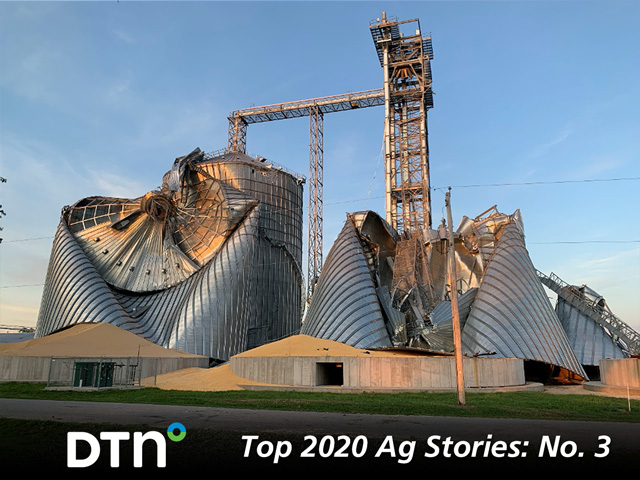