Increasing drought over the north-central U.S. got a big portion of discussion during a NOAA-coordinated monthly climate and outlook webinar Thursday, Oct. 15. The north-central region takes in the entire Midwest along with the northern and central Plains.

Growing season precipitation amounts for U.S. grain areas were varied generally, with below normal north, near normal central and above to much above normal in the Delta and Southeast. In the north-central region the faucet has turned off in the past month, notably in the Dakotas, Nebraska, Kansas and areas west. "It's been incredibly dry in September," said South Dakota State Climatologist Laura Edwards. Regarding the crop season in general for moisture, "We had a big change of pace versus a year ago," Edwards said.

Late-season dryness, especially in Iowa, caught the attention of USDA Ag Meteorologist Brad Rippey during a review of the 2020 crop year. Rippey called 2020 " ... a good year for U.S. agriculture, but far from perfect." Dryness in the Eastern Corn Belt during grain and pod fill stages and the formation of drought in Iowa caught Rippey's attention as later season adversity details in addition to the Aug. 10 derecho windstorm that ravaged Iowa cropland.

Rippey cited favorable summer temperatures as important in allowing row crops to perform as well as they seem to be; latest USDA yield estimates are a record 178.4 bushels per acre (bpa) for corn and 51.9 bpa for soybeans. "We had very little heat stress, with most days staying below 95 Fahrenheit," Rippey said.

Worsening drought in the High Plains and the western Midwest is garnering much concern during the last part of the fall season. "We now have the highest drought coverage across the continental U.S. since 2013 when we were coming out of the 2012 drought," USDA's Brad Rippey said. Rippey pointed out that 41% of U.S. winter wheat areas are now in drought. "That's far more than a year ago," he said. Edwards noted deepening drought in the north-central region. "We are seeing growing anomalies. Almost all the region is drier than average," Edwards said. September temperatures brought more drying with above average readings in much of the region, notably west and north.

Forecasts through the winter offer limited precipitation for soil moisture supplies ahead of the 2021 spring. A La Nina temperature and barometric pressure event in the Pacific Ocean offers some prospect for above-average winter precipitation near the Great Lakes. Precipitation forecasts elsewhere fall in the "equal chances" of above average, near average or below average amounts. But, winter precipitation with the Pacific Ocean in a La Nina is fickle. "La Nina is not giving us a lot of optimism for the Western Corn Belt on refilling the (dry) soil moisture profile," said USDA Midwest Climate Hub Director Dennis Todey.

Todey did note that even after freeze-up, dry soils possibly could still absorb some moisture. "Dry soils probably won't freeze the same as with moist soils," Todey said. "Dry soils might freeze deeper but maybe not as solid." But moisture ahead of complete freezing is still essential. "We have to hope that some moisture occurs before the ground freezes," said NOAA Regional Manager Doug Kluck. 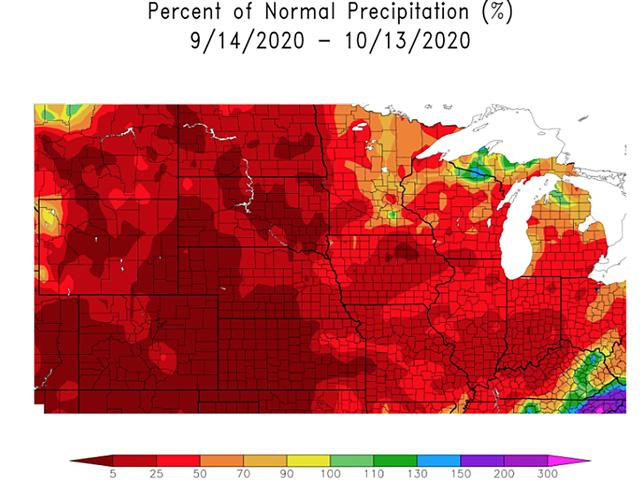