The following blog item shares the writing of climate scientist Emily Becker from the University of Miami. In a blog post on the Climate.gov web site Nov. 14, titled "November 2019 ENSO update: the people in your neighborhood," Becker described some tropical ocean and atmospheric features which, while not being as dominant as either an El Nino or a La Nina Pacific Ocean-wide event, can still influence our weather patterns. -- Bryce Anderson

ENSO (El Nino Southern Oscillation) is pretty quiet right now, with neutral conditions firmly in place. Forecasters estimate about a 70% chance that neutral conditions will continue through the winter, and a 60-65% chance through spring. With ENSO snoozing in the back yard, we'll take a tour of the tropical neighborhood to see who else is out and about.

Even though our old friend the Nino 3.4 index (that is, the departure from the long-term average temperature in the central tropical Pacific) has spent the last few weeks hovering around 0.5 degrees Celsius above average, the overall El Nino-Southern Oscillation (ENSO) system is solidly neutral. To qualify for El Nino conditions, we also require an expectation that the Nino 3.4 index will remain at or above 0.5 degrees C for at least five consecutive three-month-average periods, and that atmospheric patterns will change in response to the warmer central tropical Pacific water. Currently, we have neither of those additional requirements.

Most climate models predict that the temperature of the Nino 3.4 region will remain close to average through the spring. As the ENSO Diagnostic Discussion says this month, the forecasters believe "the recent oceanic warmth reflects sub-seasonal variability and is not indicative of an evolution toward El Nino." Though there still is an approximate 25% chance of El Nino in the winter, which means it's worth keeping an eye on the evolution of the surface temperatures.

We monitor the temperature of the water under the surface of the tropical Pacific Ocean, because a large amount of warmer-than-average subsurface water can provide a source to the surface. After an increase in this quantity through mid-October, it has begun dissipating.

Speaking of non-ENSO variability, let's see what other climate patterns are at play in the tropical neighborhood right now. I checked in with Dr. Kyle MacRitchie of the Climate Prediction Center and Dr. Carl Schreck of the North Carolina Institute for Climate Studies for some insight on current events. Both commented on the active Indian Ocean Dipole (IOD) and Madden-Julian Oscillation (MJO).

While it has no known impact on North America, the IOD can be very important for countries bordering the Indian Ocean. "The anomalously warm water [in the western Indian Ocean] has created a conducive environment for tropical cyclones to form this season, likely a driving cause of why tropical cyclone activity in the Indian Ocean has been about nine times greater than normal," said Kyle. Another example of IOD impacts is below-average rainfall in Australia during their spring (September to November) not great right now, considering the extreme fire season they're having. (In addition, the Australia wheat crop has been degraded by drought. -- BA)

The changes in Indian Ocean surface temperature can sometimes affect the atmospheric circulation. "It was really interesting to watch the IOD totally dominate the circulation for a month (mid-Sept. to mid-Oct)," said Carl.

The IOD isn't the only non-El Nino weather maker, though. The Madden-Julian Oscillation (MJO) is an area of active storms and rising air that travels from west to east along the equator. The MJO has different impacts on global weather and climate based on the location of the area of active storms.

"There is a strong MJO right now," said Kyle MacRitchie of the CPC. The area of increased storminess is currently moving through the western Pacific, "and forecast to continue around the globe during the next two weeks." In the Global Tropical Hazards Outlook, Kyle points out that the MJO is probably being partly fueled by warmer-than-average surface water in the western Pacific.

The MJO can have substantial impacts on US temperature patterns. Carl says "it's interesting that we have a pretty robust MJO now and we're having a significant weather event in North America (cold air outbreak). But I don't think there's an obvious connection between the two." Untangling cause-and-effect is a complicated process (otherwise, our jobs would just be too easy!) so it will take some time to define the sources of the current cold blast affecting much of the central and eastern U.S.

The full article with additional graphics is at this link: https://www.climate.gov/… 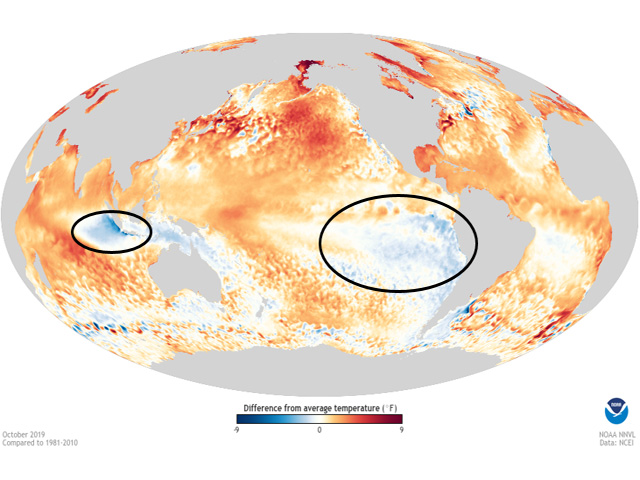