Corn planting progress remains uneven; however, we did see notable gains in some big production areas during the past week.

Rainy weather across the Midwest with some accumulating snow over northern areas kept corn planting progress behind normal in most of the region. Iowa growers, though, made headway, with nearly 20% of the crop planted statewide. This is the first sign this growing season that, given a rather small window of opportunity, producers can plant a significant amount of acreage.

I am becoming more of a believer that we are in a period of new normals as it concerns planting and crop development in the Midwest. Since the drought year of 2012, planting progress has been slowed by wet springs.

When you compare planting progress to long-term normals, it is running well behind in some states. However, if you compare it to last year, it is quite similar except in the state of Illinois, which is significantly behind last year. The most obvious case of this is in Minnesota. Corn planting is running 15 days behind normal, but three days ahead of last year.

The weather patterns of the last few years feature a cooler and wetter spring, but a warmer fall. This suggests that planting can take place later in the spring. The idea of losing yield the later that planting takes place is no longer in play because of the longer growing season in the fall.

There is no reason at this time to feel that this year is any different than the past few years. And, as we saw in Iowa last week, significant planting can take place in a short period of time. I would expect to see more of these windows of opportunity open up in the next few weeks despite the fact that our six- to 10-day outlook calls for near- to above-normal rainfall to continue.

Very favorable soil moisture in the Southern Plains winter wheat belt was reflected in good-to-excellent crop ratings. Ratings were up by 9 percentage points in Texas and Oklahoma, 3 points in Colorado and 1 point in Kansas. With near- to above-normal rainfall expected to continue during the next 10 days, crop prospects remain high. 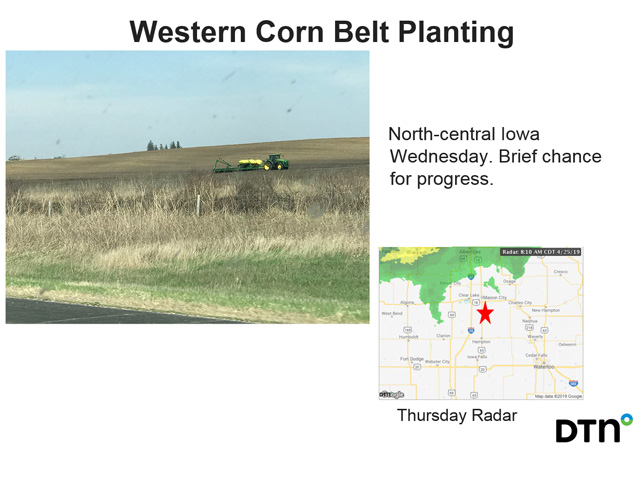