Major late-winter snowstorms have added to the snow pack over the Dakotas, northern Minnesota and into southeast Manitoba during recent weeks. This snow pack increases the risk for severe flooding on the Red River in Manitoba during the coming weeks.

As heavy snow cover melts, it will increase the risk for spring flooding in these areas. The hydrologic Forecast Center of Manitoba reports that, even with favorable weather, a Red River flood of a magnitude higher than 2011 is indicated. They are also suggesting that with unfavorable weather, defined as normal or average weather conditions, flooding could exceed the magnitude of flooding back in 2009. It appears the problem area will be the Red River and its tributaries at this time. This assumes no further or widespread snow events would occur within the next couple of weeks.

A favorable weather pattern would most likely be considered one that is mainly dry, with normal or slightly above normal temperatures. This would allow for melting during the daytime hours and some re-freezing at night. The waters of the Red River would only gradually increase and limit the scope and severity of the flooding. An unfavorable weather pattern would likely be considered one that features much warmer than normal temperatures and moderate to heavy rain added to the snow on the ground. This would most likely contribute to the more-extreme flood risk, similar to 2009 or even greater.

The weather patterns during the next seven days do offer a drier trend, with temperatures running above normal to sometimes normal or a little below normal. This should allow for a slower snow melt during this time frame. The eight- to ten-day forecast suggests a slight chance for moderate precipitation to occur, but with no dramatic warm up in temperatures. If this moderate precipitation does develop, it would increase the flooding risk somewhat, but does not show a dramatic difference in the overall flooding threat.

In general, the weather pattern over central Canada and the north-central U.S. shows upper-level ridging (high pressure) in Alaska and northwest Canada, and an upper-level trough (low pressure) over Hudson Bay and Ontario. This type of ridge west-trough east pattern leads to a general northwest-to-southeast flow over Canadian Prairies, including also the Dakotas of the U.S. This is a dry wind direction for the area with below normal precipitation. This likely means that if the slight chance for precipitation mentioned in the 8-10 day period fails to develop, then the more-favorable pattern for a slow snow melt would likely continue at least into the middle of April, possibly longer.

Seasonally, forecasts going out a little farther in time suggest a more west-to-east flow would develop during the middle to late part of April. If verified, this is still a pattern featuring normal or less-than-normal precipitation, but also normal to above-normal temperatures. This could lead to more rapid snow melt, but still not to the extreme.

Recent snowstorms through the Northern Plains of the U.S. and the southeast Canadian Prairies have indeed increased the risk for severe flooding along the Red River in Manitoba during this spring season. However, the forecasts suggests this flooding risk would not get significantly greater than it is now, and may actually improve somewhat with time. The forecasts during the next couple of weeks will need to be monitored to be sure this situation does not change significantly. 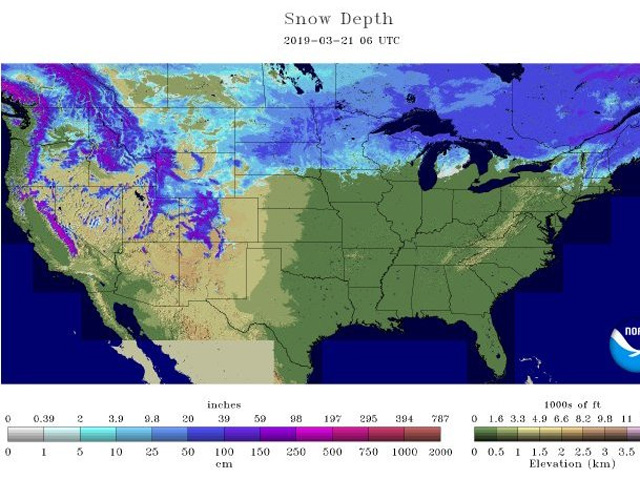