Blocking high pressure over the far northern portion of the globe shows no signs of breaking down. This blocking feature led to a stronger-than-normal jet stream over the Midwest and Northern Plains, and parked very cold air over the Canadian Prairies. The impact on agriculture is easy to surmise: This means episodes of cold and unsettled weather will continue to keep fieldwork and corn planting behind normal.

North Dakota says that on average fieldwork will begin May 3. This may be optimistic. A major spring storm is expected to affect southern portions of the Northern Plains and much of the Midwest later this week with mixed precipitation over western areas, rain in the east, and very strong winds. Moderate to heavy precipitation totals are expected. Temperatures out ahead of this system will turn warmer before colder weather returns behind the system during the weekend. Soil moisture supplies are generally adequate to surplus across the Midwest which will favor corn and soybean development once it gets planted. This spring pattern is one we have become quite familiar with over the past few years and, despite current concerns, ultimately leads to a good growing season.

Farther south, the strong jet stream pattern has become quite unfavorable for wheat in the Southern Plains, as drought conditions are well-established in many locations. Gulf of Mexico moisture is unable to make its way back to the west under the strong westerly flow aloft. This is a common situation in winter, but normally breaks down in spring.

This year, however, with weather patterns running about a full month behind normal, drought conditions could have a major impact on winter wheat during its critical reproductive stage of development. This is most likely in Oklahoma, western Texas and southwest Kansas. Oklahoma is reporting that drought conditions have been ongoing in the northwest part of the state for six months.

In the Delta and Southeast, corn planting progress is at or ahead of normal, except for Arkansas. Despite brief episodes of heavy rains, there have been enough drier spells in between events that planting is able to continue. Some early soybean planting is also underway.

At this time of year, the South American growing season is winding down. Argentina’s well-publicized drought is breaking down, but the easing of dryness is too late to significantly help crops. Across Brazil, soil moisture is adequate for second-crop corn (safrinha) in central Brazil. And in the south, harvest weather for soybeans is favorable in Rio Grande do Sul. 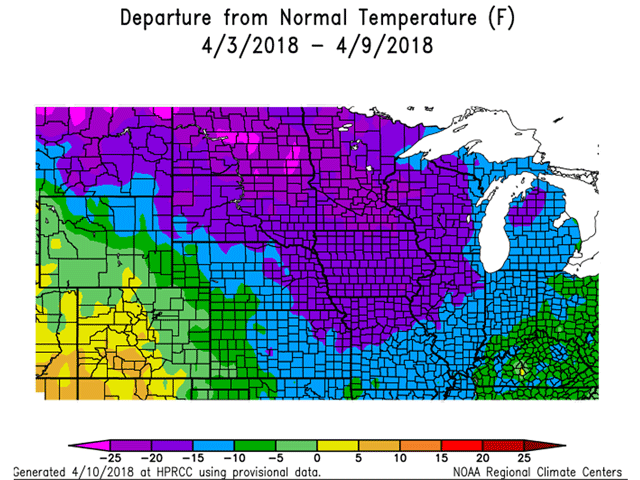