OMAHA (DTN) -- Widespread, heavy, and possibly record rainfall from Tropical Storm Harvey inundated southeastern Texas during the weekend, with rain forecast to continue through almost the entire upcoming week. As of early afternoon of Aug. 27, more than 2 feet of rain had been recorded in southeast Houston, Texas. Rainfall totals, as measured by NOAA observation stations, are so great that they are "off the NWS scale", noted Texas Tech climate scientist Katharine Hayhoe in a tweet Sunday morning.

Flooding and heavy rain are not over with, however. "Harvey is expected to produce additional rain accumulations of 15 to 25 inches over the middle and upper Texas coast through Thursday," said DTN Senior Ag Meteorologist Mike Palmerino. "Isolated storm totals may reach around 40 inches in this area." Palmerino also noted that the heavy rains are producing "catastrophic and life-threatening flooding, and flash flood emergencies are in effect for portions of southeastern Texas."

Southeast Texas agriculture has extensive damage in store from the impact of Harvey-related rain; however, quantifying will take some time, according to Texas A&M Agrilife Communications Specialist Kathleen Phillips. "All indications are that the flooding will be unprecedented. It will take time to get numbers pulled together," Phillips said Friday in an e-mail to the North America Agricultural Journalist association. "Our county agents with Texas A&M AgriLife Extension will be in the fields as soon as they can be, but remember that they also live in those areas and are evacuating as well. Our agency will be managing some Animal Supply Points but we don't know where they will be at this time."

On Sunday afternoon, Phillips wrote in an update, "This is a storm still in progress and it's impossible to get into many places to know the extent of things ... Right now, people are being told to call 211 in Texas to find out where to take animals (small and large) for sheltering. Many of these Animal Supply Points are set up and operating; 211 keeps the list rather than us, to hopefully provide a one-stop place for all people to call instead of having to wonder where to call."

In addition to human and livestock safety threats, the prodigious rainfall from Harvey pose a significant threat to cotton still in the fields in southeastern Texas. Statewide, Texas cotton harvest was just in the early stages on Aug. 21 at just 9% complete. Ports of Corpus Christi and Houston remained closed Sunday.

One key aspect of Harvey's destructive rainfall is its duration. DTN Public Safety Meteorologist Tanner Verstegen is uncertain that this feature was fully appreciated.

"The missed message may have been that the heaviest rain will come days after landfall, which may have let the guard down for some people," Verstegen said. "It will be a top-5 costliest tropical system of all time, and likely the worst flooding event in U.S. history. Safe to say at this point." 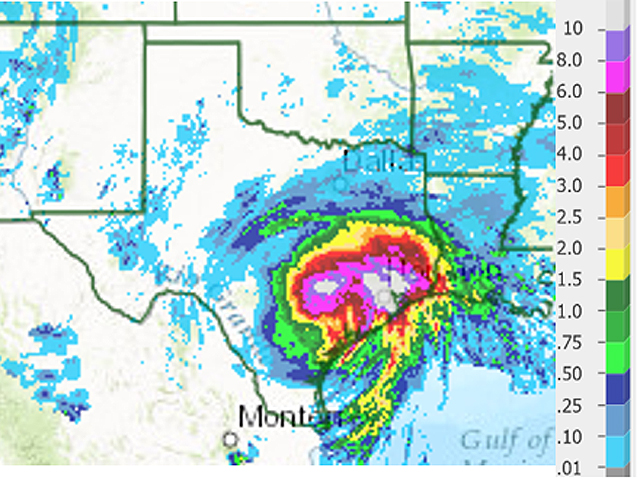