Despite episodes of cool, wet weather, planting progress in the Midwest is good. Corn planting at 84% complete is just one percentage point below average. Soybean planting, with a 53% completion rate, is one point ahead of average this week.

The outlook for the Midwest during the next seven to ten days calls for cool and wet conditions to dominate. This will slow planting of corn and soybeans in the east and soybeans in the west. It will also lead to yellowing of corn due to a lack of sunshine and growing degree days, along with some leaching of nutrients from the soil due to heavy rain. This will likely lead to a reduction in crop ratings in the short term.

In the Southern Plains, a cool and wet trend prevented much improvement in winter wheat crop conditions as the crop tries to recover from the effects of the late-April cold and snow. We are seeing more comments about increasing disease pressure due to the wet pattern. In fact, it was reported that the Oklahoma Panhandle has just observed the wettest 60-day period since 1921. An overall cooler than normal and wetter than normal weather pattern is expected to continue during the next week to ten days. We would look towards more disease issues as more of the crop matures. Crop quality issues and lower protein wheat will become of increasing concern.

Thus far, the Northern Plains region has been spared the wet conditions that have been featured in the Midwest. This is reflected in planting numbers for both corn and soybeans running ahead of normal. However, warmer temperatures would benefit crop development. Temperatures are expected to remain on the cool side during the next week. 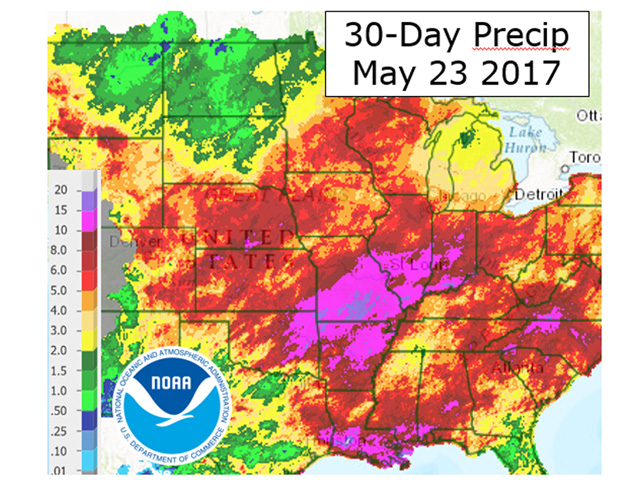