Rainfall of moderate-to-heavy totals that was forecast to occur during the end of June/early July time frame over the south-central Plains and southern Midwest certainly got cussed and discussed. This event was touted in weather prediction models for close to a week, which gave those of a doubtful nature plenty of chances to air their perspective on this forecast.

You know how things played out, of course. Over half the states of Kansas and Missouri, the southern third of Illinois, southwestern Indiana, and western Kentucky took in rainfall totals of more than 2 inches, and up to 5 inches plus, during the U.S. Independence Day holiday weekend. (A narrow band of that heavy rain even occurred in northwestern-through-eastern Nebraska. I'll vouch for that after emptying my rain gauge.)

We all saw how grain markets reacted once trading began, following the fireworks clean-up. Soybeans completely tanked. Corn was also sharply lower. This brings us to the subject of the upper-atmosphere pattern that helped to make the southern Corn Belt rain possible.

Back in early June, there was a fair amount of chatter about the pending onset of a dome of stifling hot air to form over the south-central Plains and then encroach into the Midwest. This feature was indeed on the charts about two weeks ago, during the last part of the big corn and soybean price rally. However, the dome never happened -- at least, not over the Midwest. Instead, it repeatedly has focused over the Chihuahuan Desert near the Big Bend area of western Texas. At the same time, persistent upper-level low pressure off the Pacific Northwest coast was a steady provider of disturbances rolling into the north-central part of the country. These systems, moving on the edge of the southwestern desert dome, have been rain-makers, as we saw last weekend.

This pattern is apparently not finished, either. The post-Independence Day market week is kicking off with showers and thunderstorms in the central Plains and northern Midwest, and this batch of activity appears to have the gusto to continue rolling through the balance of the Midwest over the next few days. By the time mid-July rolls around, the majority of the Midwest has rainfall of more than 2 inches indicated. That is indeed a "leaky" ridge, because even though the weather will be very warm to hot, there's also rain firing up to keep crop moisture well-supplied for the most part.

Is this a "perfect" summer? No -- but it's certainly a long way from a "disaster" at this point. 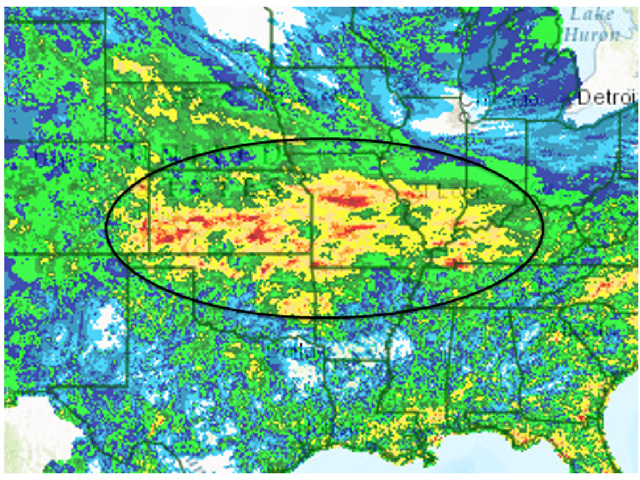