Crop growth and development is racing along across western Canada as warm temperatures and continued rainfall put the majority of crops ahead of their normal development stage for this time of year. While many areas are in good-to-great shape, there are a few spots where excess moisture and too little rainfall are a problem.

On the whole, the weather gods have been very kind to farmers across the Prairies during the 2016 growing season. Dry conditions across most of the west were taken care of by generous rains from mid-May to present and warmer-than-average temperatures have pushed development ahead of schedule.

While all is good for many, there remain dry soil conditions across southern and southwest Alberta where most of the recent wet weather makers seem to have bypassed with little more than a few light showers. As an example the June rainfall total for Lethbridge, Alberta, is but 13.8 mm or 17% of normal while at Peace River the 79.6 mm total is 120% of normal.

More rain would be beneficial for farmers across southwest Alberta where crop stress is being reported but even through this district topsoil moisture is only being reported at 38% short, which is not a total disaster.

Another area that has seen some problems is across southern Manitoba where excess soil moisture and rainfall along with strong thunderstorms, wind, and hail have caused some damage to crops. While there are problems for some, the majority of the province is having a good crop season to date.

Temperatures have been more consistent across western Canada with June's readings likely to come in between 1 to 2 degrees Celsius above normal. No late season cold has been noted.

The outlook for early to mid-July continues to be a favorable one for the region with temperatures expected to average somewhat above normal and with rainfall at near to above normal levels. As is always the case, there will be some areas with a few problems but the majority of western Canada's crop areas should continue to enjoy a very favorable crop season with crops staying ahead of schedule on development.

Another low pressure area should bring a round of showers to many areas early-to-mid next week, hopefully helping out the dry parts of southwest Alberta and hopefully skirting the wet areas of Manitoba where some drier weather would be in order. 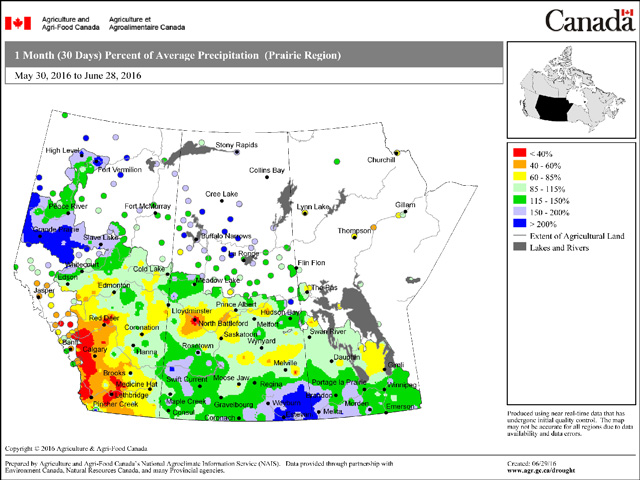