WASHINGTON (DTN) -- Speaking to about 250 members of the National Farmers Union on Monday, Agriculture Secretary Tom Vilsack credited NFU for being one of the driving forces behind multiple policies that have become law or policy for agriculture and rural America in the Biden administration.

"In many respects, the National Farmers Union has been the architect and the designer in terms of the work we are doing in this administration in rural America and farm country," Vilsack told the group.

This will be a big week for USDA as the department is expected to announce the recipients of $1 billion in grant funds under the Partnership for Climate Smart Commodities pilot programs that USDA solicited for projects last spring.

NFU members met with Vilsack and several members of USDA's leadership team as the group's lobbying fly-in became the largest outside gathering at USDA's main office building since COVID-19 struck.

NFU members took time to thank USDA leaders for their work while the group also was "champing at the bit over the next pieces that are coming out such as the climate announcements this week," said Rob Larew, president of NFU.

While NFU has been pleased about the funding of programs on climate change and the major investments in local and regional food systems, Larew noted some concerns among his members about the volume of dollars and array of initiatives right now at USDA.

"I have to say, with all of this money going out the door, are they truly going to have the capacity behind it to actually deliver it and deliver it in a timely manner?" Larew said.

USDA also has streamlined some programs such as disaster assistance, automating some of the forms for farmers. Vilsack said that significantly reduced the hours for both FSA staff and farmers when it came to getting out the Emergency Relief Program (ERP).

Larew noted the importance of USDA technical assistance, support and rules for receiving aid on grants and loans going out to meatpackers and poultry processors. Larew said he understands USDA has some terms and conditions on those grants, though he didn't know the details.

"Everybody's fear on some of these projects, like these meat and poultry processors, is that they get down the road in few years and either just fall on their face because they don't have any kind of technical assistance behind them or support, or they get bought up by the bigger guys, and they end up just shutting down," Larew said.

After meeting with USDA, some NFU leaders met with Jonathan Kantor, the assistant U.S. attorney general over antitrust and several other staff members from the Department of Justice. Larew said the DOJ contingent wanted to learn more about cattle markets, including the operation of sale barns. Larew also said DOJ didn't provide any details on where the department stands on its investigation into cattle markets that began during late spring 2020 as the live cash prices and the boxed beef spread widened during the pandemic.

"DOJ really tried to steer clear of any kind of active cases, obviously, but it's clear they have a huge team working on these issues and they have a strong appetite for wanting to know more and hear more information," Larew said. "The fact that they have already been working hard on it was evident today."

Jeff Kippley, the NFU vice president, who farms in South Dakota, said he was a little surprised how much DOJ officials didn't know about the cattle markets and the questions they asked.

"They have been working on it a long time and they didn't seem to know a lot of things," Kippley said. "They really wanted to follow up with us to learn more, which is exciting."

NFU leaders also talked to DOJ officials about right-to-repair issues and concerns over what kind of data equipment manufacturers collect from farmers as the equipment companies focus more on selling software packages to producers.

While pointing to strong U.S. exports, Vilsack said USDA is focused on taking lessons from COVID-19 and building more resiliency into the food system. He said USDA is using the federal government's procurement power to shift some funding from national distributors to local foods in areas such as food banks and school food purchases.

"We have to really look at building that local and regional food system," Vilsack said. Pointing to the procurement side, he added, "Because we do purchase a lot of food for local food banks and for schools."

By the first week of October, USDA also will announce a series of grants worth roughly $150 million to expand meat and poultry processing capacity, Vilsack said.

USDA will also build six regional business centers to promote more than 50 programs within the department. Those offices will staff experts to help those who want to develop a local or regional food system.

While Vilsack talked a lot about local and regional food systems, Kippley said farmers in a state such as South Dakota aren't going to do a lot of direct sales to consumers. But having more, smaller, regional processors will create a more competitive market, he said.

Kippley said he liked Vilsack's focus on a "circular economy" in rural America.

"We are kind of done stealing money from the Midwest and putting it into overseas pockets, or into corporate pockets," he said.

Walter Schweitzer, president of the Montana Farmers Union, told Vilsack his state still doesn't have a state FSA committee and "many of our offices are down to one or two positions." He encouraged USDA to start hiring more farmers as part-time staffers at FSA offices.

Vilsack agreed that right now the federal hiring process is "fairly cumbersome" and not fully in USDA's control because of standards set by the Office of Personnel Management, a separate agency.

"We're not competitive with the wages we are paying," Vilsack said.

NFU has been focused for more than a year on its Fairness for Farmers -- a campaign to raise more attention on corporate consolidation in agriculture and the need for antitrust enforcement. The group noted four major packers control more than 80% of fed cattle slaughter; four companies control 85% of corn seed; and three companies control the bulk of farm machinery sales.

With that, some of the major bills NFU wants to see Congress enact include:

-- Cattle Price Discovery and Transportation Act: Passed the Senate Agriculture Committee, but yet to get a floor debate; the bill would mandate more cash trade for cattle among major packers.

-- Agricultural Right to Repair Act and the Repair Act: Two separate bills that would make it easier for farmers to repair new equipment themselves or take to a repair shop other than the dealer.

-- 2023 Farm Bill. While still early, NFU would like to protect crop insurance and consider increasing reference prices under the commodity title to reflect higher input costs. NFU would also like to see Congress enhance or develop a permanent disaster program after Congress has been forced to pass multiple disaster packages since the 2018 farm bill was passed. Along with that, NFU wants to see changes to dairy policy and continued efforts to support conservation, climate programs and biofuels at USDA.

-- Growing Climate Solutions Act: Get the House to pass a bill that cleared the Senate last year with 92 votes and would allow USDA to set some standards and provide oversight to carbon markets.

-- Next Generations Fuels Act: This bill would provide a pathway to 30% ethanol blends as a higher-octane blend and further incentivize increased use of biofuels.

He pointed to EPA's summer waiver on E15 waiver, which "was not an easy thing to do." Vilsack added USDA has provided $100 million to expand capacity of E15 blends nationally. He also called the sustainable aviation fuels (SAF) initiatives in the Inflation Reduction Act (IRA) as a "massive opportunity" that will "jettison" the industry forward.

On Tuesday, several NFU members will also attend an event at the White House celebrating the passage of the IRA, passed by Congress in August that includes $369 billion in federal programs around climate change, including $19.5 billion for USDA conservation programs. 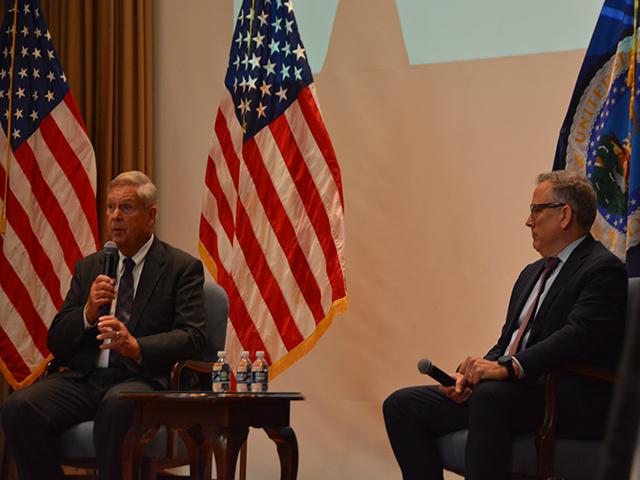