Agriculture Secretary Sonny Perdue told reporters in Georgia on Thursday that he had not talked with any other Cabinet members about invoking the 25th Amendment, despite calls from Congress and others to remove President Donald Trump from office.

"I've had no contact with other Cabinet members in that area," Perdue said. "Nor do I expect to have any."

At 6:30 p.m. Central on Thursday, the White House issued a link to a video from President Trump in which he condemned the violence at the Capitol, saying "The demonstrators who infiltrated the Capitol have defiled the seat of American democracy," Trump said. He added, "You do not represent our country and those who broke the law, you will pay."

Acknowledging the "tense election" Trump said tempers are high and need to cool down. Trump said "a new administration" will be inaugurated. And Trump said he would turn to "ensuring a smooth, orderly and seamless transition of power." Trump added, "This moment calls for healing and reconciliation."

Perdue acknowledged others in the administration were submitting resignations, and the secretary said that's their prerogative. Perdue said the country will move forward behind President-elect Joe Biden.

Leaders from some major agricultural groups weighed in Thursday on the violence at the Capitol in Washington, D.C., citing the impacts on the nation's democracy when a Constitutional action is disrupted by a mob. Some of the groups have their national offices just blocks from the Capitol.

National Farmers Union criticized the "far-right insurrectionists" who stormed the Capitol. NFU President Rob Larew said its members support peaceful protest, but Wednesday's events amounted to "acts of intimidation and terror" which "have no place in this country, and they cannot be condoned or brushed aside."

More broadly, Larew said Wednesday's events reflect how fragile democracy is. "It doesn't exist simply because it is written in the Constitution; it requires action of the part of every American. Every day, we must commit anew to upholding its core tenets of social equality, personal liberty, sovereignty, and a peaceful transfer of power," Larew said.

"Our democracy is precious, and our dedication to the peaceful transfer of power is what sets us apart from much of the rest of the world," Duvall said. "This nation was founded on the belief that we can debate our differences without resorting to violence. Storming the U.S. Capitol -- or any federal building -- and threatening the lives of police officers, first responders and elected leaders is not the answer. We must come together, not as farmers or city dwellers or suburban families, but as Americans, and put aside the bitterness that has divided us and rally behind the principles that unite us."

Jim Mulhern, president and CEO of the National Milk Producers Federation, congratulated Biden and Vice President-elect Kamala Harris. Mulhern added, "Yesterday's reprehensible violence was an attack on our democracy, intended to undermine the results of a free and fair election and desecrate the sovereign will of the American people. Peaceful protest is a cornerstone of our society; yesterday's insurrection put thousands of lives in danger in a brazen mob attempt to disrupt the peaceful transfer of power that has marked our country since its founding and has always set apart the United States as an example to the rest of the world."

Mulhern added gratitude to the professionals who kept people in the Capitol safe during the events, but Mulhern also criticized political leaders who stoked the protests against the election.

"We emphatically reject the rhetoric of elected officials whose words encouraged and perpetuated yesterday's assault on our democracy," Mulhern said. "And we pledge to do our part to work with the Biden Administration and Congress to move our country forward this year, always supporting the democratic ideals that remain the foundation of these United States."

Perdue also responded he was sad to see President Trump's supporters turn a protest into an attack at the Capitol. "I'm saddened by the events I saw, very sad. That's not what I know of as America. We transition power and democracy in and our Republic ... I'm very saddened by what I saw."

The secretary added, "I'm very discouraged by the people who were there and felt compelled to breach the Capitol and do the things that they did. That's not representing of who Americans are, and certainly not representative of who Georgians are."

Perdue spoke to reporters in Georgia before he hosted a USDA rural broadband event. Perdue was already in Georgia on Wednesday, following the Tuesday election and leading up to his Thursday morning event. He headed back to Washington on Thursday afternoon. USDA's press team provided a recording of Perdue's talk with the reporters.

Perdue was asked about Trump's tweets and comments by the president's personal attorney, Rudy Giuliani, though Trump also gave a speech to the crowd before they headed to the Capitol. Perdue responded by comparing Wednesday's event to "what Americans would see in a video or on television" in Malaysia, the Philippines or Middle Eastern countries. "That's not the way we resolve things in America," Perdue said.

He added that if the comments from Giuliani about "trial by combat" are correct, then, "I think that it sounds like that was encouraging those types of actions," Perdue said. 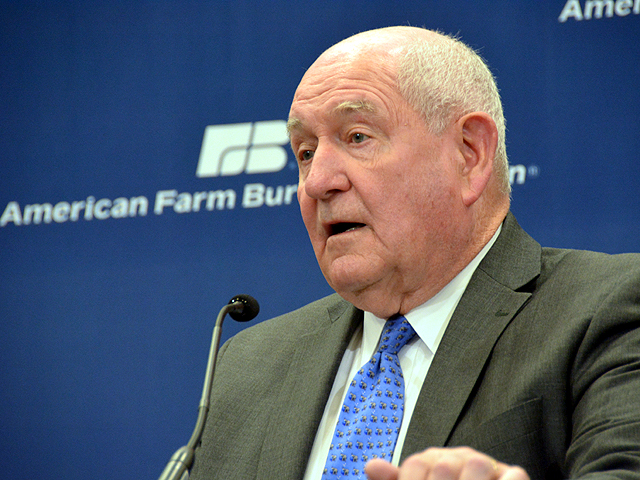