House Agriculture Committee Chairman Collin Peterson, D-Minn., said late last week he is not job hunting, but has offered to help the Biden administration set up its agricultural policy.

Peterson responded to reporters' questions about his future during a telephone news conference about a bill he has introduced to make an additional 25 million acres available over the next five years for general signup under the Conservation Reserve Program (CRP).

Instead of a cap, the bill establishes a minimum floor of 50 million CRP acres nationwide, Peterson said in a news release about the text of the bill. The current cap is 27 million acres.

Peterson acknowledged that there is no way his bill would pass the bill before Congress adjourns, but said he was “firing a shot” about a program he considers important as he leaves after his defeat in November.

Peterson's bill comes as CRP acres are actually lower than expected. The level of acreage enrolled in the CRP as of October is at 20.76 million acres, down from 21.9 million acres as of September. This is a smaller total than had been expected based on the combination of contract expirations and new enrollments under the most recent general CRP signup and the continuous CRP efforts. Expectation had been that the combination of contract expirations and new enrollments would have put acreage at around 21.6 million acres.

It is not clear if the smaller-than-expected acreage enrollments from the general signup and the Grasslands effort reflects delayed reporting of contracts starting or whether growers actually opted not to follow through with their enrollment intentions.

Peterson also talked about his relationship with President-elect Joe Biden, and his long term views on agriculture. Asked whether he was interested in becoming Agriculture secretary, Peterson, “I am going to back whoever the president picks. It's not my job to pick the Agriculture secretary.”

Peterson noted that that he has been “in the saddle” of public life for 45 years, and said that when he went hunting with his children after losing the election, they said he was “like a whole new person.”

Peterson said he had “mixed emotions” about the election results, and that he is not looking for a full-time, four-year job.

Peterson, who endorsed Biden earlier this year and noted at the time that he had been politically aligned with him for many years, said he told the transition team “I was willing to consider helping” with the agriculture transition.

“There are plenty of good people out there” who could be secretary, Peterson said. But he added, “If the president asks you to do something. I think you have to consider it. I care a lot about agriculture, I care a lot about these issues.”

The Biden administration needs to be careful about how it approaches the issues of climate change and carbon capture, he said.

Peterson said he believes that a larger CRP, which idles land for conservation and wildlife habitat purposes, could be a key factor in sequestering carbon. “This is the most successful conservation program in the history of the country,” he said.

People talk about the Conservation Stewardship Program, which applies to working farm land, but Peterson said he believes the CSP has its limits.

Corn and soybean prices have gone up, but Peterson said he doubts the higher prices can be sustained.

He noted that the CRP, which idles crop land, would reduce production.

“We have the ability to overproduce in this country,” he said.

Peterson also discounted the notion that reduced production leads to loss of markets to other countries such as Brazil, which has increased production in recent years.

Corn and soybeans are commodities, not branded products, he said, and foreign buyers will buy from the United States when it makes economic sense. Trade agreements and conflicts have had a much bigger impact on commodity markets than CRP land idling, he said.

Asked about agribusiness concerns that taking land out of production increases prices, Peterson said, “Prices are never going to be low enough for some people.”

Peterson acknowledged that climate change is going to be “a hot issue” in the Biden administration, but said he is worried about how the administration will approach it.

The idea of using the Commodity Credit Corporation to help create a carbon bank, which Robert Bonnie, the head of Biden's USDA review team, has proposed in an academic study, would be “a tough sell” to farmers, Peterson said.

Farmers have bad memories of the proposals during the Obama administration to create a cap and trade program, he said, noting that farm groups had come to him with a list of 49 problems with the proposal, and that when the congressional leadership resolved all those issues, the farm groups still opposed the program “and campaigned against those who voted for it.”

Peterson also said that there are limitations in the Commodity Credit Corporation Charter Act that limit what the CCC can be used for, and that only lawyers can determine whether the CCC could be used to develop a carbon bank. He added that he believes the government is already borrowing too much money and noted that the money spent through the CCC is borrowed.

Sen. John Boozman, R-Ark., the incoming chairman of the Senate Agriculture Committee, has already questioned the use of the CCC for a carbon bank, Peterson said.

In what appeared to be a veiled reference to the study in which Bonnie participated, Peterson said, “You can have people thinking in their ivory towers about what farmers should do” but the farmers won't do it if it is not practical. Peterson said the Biden administration should not “go off on some pie-in-the-sky deal that someone dreamed up in a university” if it is impractical.

Peterson noted that had he been re-elected, he planned to spend the first six months of the new Congress investigating what happened in the meat industry during the coronavirus pandemic and exploring how the CCC could be used to address emergencies in the future.

Peterson said that Rep. David Scott, D-Ga., the incoming chairman of the House Agriculture Committee, has said he will listen to “my counsel” and that he has promised be “a big friend” of the dairy and sugar industries.

But he added that Scott ultimately will have to decide the committee's agenda in the next Congress.

Asked if he might become a conservation lobbyist, Peterson said he could not talk about his future until January 3 when the new Congress comes into session and his term ends.

“I will probably be around in some capacity in the future,” he said, adding he wants to take time to figure out what he will do “when I grow up.” 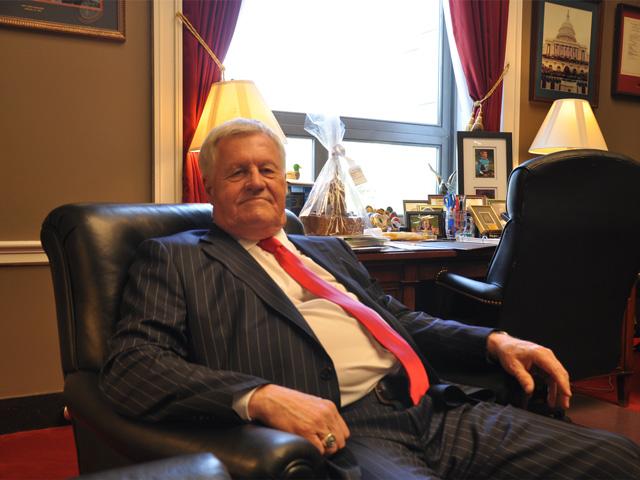