In accepting the Republican nomination to run for a second term, President Donald Trump on Thursday night made historical references to American farmers and ranchers but did not mention current concerns except some brief references to trade.

Toward the end of his hour-long speech, Trump said, “Our American ancestors sailed across the perilous ocean to build a new life on a new continent. They braved the freezing winters, crossed the raging rivers, scaled the rocky peaks, trekked the dangerous forests, and worked from dawn till dusk. These pioneers didn't have money, they didn't have fame — but they had each other. They loved their families, they loved their country, and they loved their God!

“When opportunity beckoned, they picked up their Bibles, packed up their belongings, climbed into covered wagons, and set out West for the next adventure. Ranchers and miners, cowboys and sheriffs, farmers and settlers — they pressed on past the Mississippi to stake a claim in the wild frontier.

“Americans built their beautiful homesteads on the open range. Soon they had churches and communities, then towns, and with time, great centers of industry and commerce. That is who they were. Americans build the future, we don't tear down the past!”

Earlier in his speech, Trump said, “Days after taking office, we shocked the Washington establishment and withdrew from the last administration's job-killing Trans Pacific Partnership. I then approved the Keystone XL and Dakota Access pipelines, ended the unfair and costly Paris climate accord, and secured, for the first time, American energy independence.

“We passed record-setting tax and regulation cuts, at a rate nobody had ever seen before. Within three short years, we built the strongest economy in the history of the world.”

Trump did not acknowledge that most farm groups supported the Trans Pacific Partnership or that some of his regulatory and energy decisions remain mired in legal problems.

Trump noted that his critics said “it would be impossible to terminate and replace NAFTA — but again, they were wrong. Earlier this year, I ended the NAFTA nightmare and signed the brand new U.S. Mexico Canada Agreement into law. Now auto companies and others are building their plants and factories in America, not firing their employees and deserting us.”

He did not acknowledge that farm groups are already questioning whether Canada and Mexico are living up to the new trade agreement.

Trump did not mention ethanol, but said Democratic presidential candidate Joe Biden “has promised to abolish the production of American oil, coal, shale, and natural gas — laying waste to the economies of Pennsylvania, Ohio, Texas, North Dakota, Oklahoma, Colorado, and New Mexico. Millions of jobs will be lost, and energy prices will soar.”

Trump's remarks as prepared for delivery: 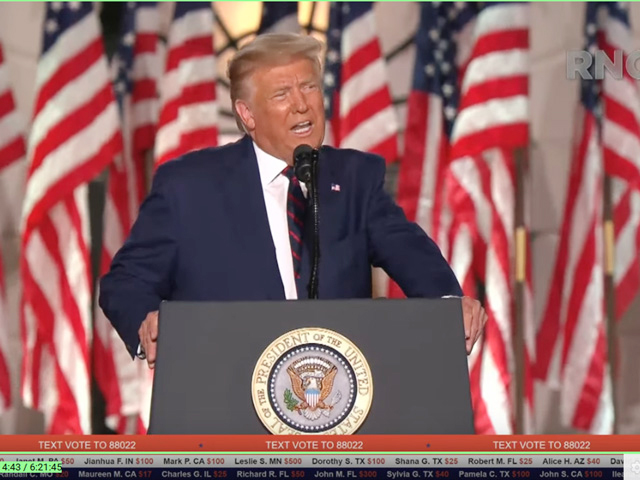