In testimony that covered an array of trade topics, Lighthizer testified essentially all day, starting the morning with the House Ways and Means Committee, and then testifying in the afternoon before the Senate Finance Committee.

The trade ambassador told both committees that there is "every indication" China will meet its obligations under the phase-one deal despite the impacts of the coronavirus. Lighthizer also defended the content of the trade deal despite repeated attacks from Democratic lawmakers.

"I see press reports sometimes and they act like it's a just a soybean sales contract when it really has a lot of very, very serious parts to it," Lighthizer told the House committee.

When talking about agricultural trade, Lighthizer dismissed complaints that China was behind in buying U.S. products. He said sales and commitments are continuing to pick up, pointing to a $500 million soybean sale last week, and said sales of products such as soybeans would increase dramatically later in the year. Most soybean sales to China before the trade war occurred during and shortly after the fall harvest.

While official trade data through the end of April shows agricultural sales in the $4.6 billion range, Lighthizer said more current numbers are significantly higher. "I think at this stage they are in the $10 billion or more range," he said.

Lighthizer later told senators he thinks agricultural exports to China right now "are ahead of our best year in almost every single crop." He said exports of cotton, sorghum and pork are all ahead of last year, and there are now beef exports to China.

China had committed to buy $36.6 billion in the first year of the phase-one agreement, which went into effect in mid-February.

More than 190 agricultural groups wrote President Donald Trump this week to stick with the China trade deal and continue to ensure compliance. While groups wrote the letter because they saw China behind in its agricultural purchases, Lighthizer said he viewed the letter as positive. "Really, they were all saying this really a great agreement. Let's stick with it. So it took that as a very positive letter."

Lighthizer pushed back on Democratic complaints about the phase-one deal, saying, "We are getting lectured by Democrats who literally did nothing for eight years." He also pointed out tariffs remain on $370 billion in Chinese exports to the U.S.

On the U.S. Mexico Canada Agreement, it goes into effect July 1, but Lighthizer said there may already be issues of enforcement that will need to be fought in legal battles over Mexico's enforcement of labor agreements. He also warned against watching Canada's access for U.S. dairy products. Lighthizer said Canada has a few months to get rid of milk class programs that were problematic, but Canada could implement the USMCA in a number of ways "that would be less than helpful to us than other. On Canadian dairy, "there is a long history of manipulation there," Lighthizer said. He added, "We're going to be very, very dogged on that."

The U.S. and United Kingdom in the middle of the second round of trade talks. Lighthizer said ultimately there will be a deal there. "The imperative to have one is overwhelming. Our economies are fairly close, our system is fairly close, they are among our closest allies," he said.

Still, the trade representative said agricultural issues are heating up and will continue to complicate talks as the U.K. seeks to advocate for European standards on biotechnology and other agricultural issues that the U.S. Congress would not accept. The Brits have the European view that American food is unsafe, which Lighthizer called "thinly veiled protectionism."

"In the UK, we will have problems in the agricultural negotiations, I guarantee you," Lighthizer said.

Lighthizer called the WTO "a mess" that has "failed America" and failing trade globally. Lighthizer said reforms at the trade body are needed to provide fairness for the U.S. "The institution has gone astray."

He also said the WTO right now is not capable of disciplining a large state-run economy such as China. Lighthizer said "radical reform" is needed at the WTO, and the both the global tariff situation is "non-functional" and the appellate body of the WTO amounts to unelected, unaccountable people. "It's a screwball system."

The Trump administration is looking at possibly raising tariffs on countries unwilling to lower tariffs on U.S. products.

Lawmakers also criticized U.S. tariffs on personal protection equipment, which both House and Senate members said were making it more costly for their medical providers and other business to get the equipment. "All that tariffs do right now is making personal protective equipment more expensive," said Sen. Maggie Hassan, D-N.H.

Lighthizer repeatedly disagreed with those takes, arguing that the tariffs in place now would incentivize companies to make those product in the U.S. 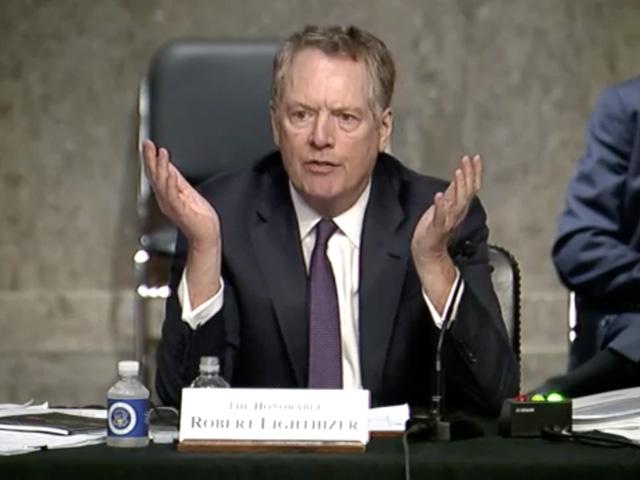