WASHINGTON, D.C. (DTN) -- Farm leaders and members of Congress gathered on the National Mall Thursday to rally for approval of the U.S.-Mexico-Canada agreement on trade.

The rally took place in front of a 25-foot recreational vehicle festooned with pro-USMCA signs that had traveled 20,000 miles to 30 states and made 100 stops promoting approval during a “Motorcade for Trade” sponsored by Farmers for Free Trade, a bipartisan group.

House Agriculture Committee Chairman Collin Peterson, D-Minn., who broke with his own history of opposition to trade agreements to endorse USMCA months ago, urged the attendees to be patient, but to expect a vote later this fall.

“I’m optimistic,” Peterson told reporters after he spoke to those gathered.

Democrats, including House Speaker Nancy Pelosi, D-Calif., have called on the Trump administration to address a series of their concerns, particularly whether provisions of the agreement can be enforced.

Trade Representative Robert Lighthizer has sent his proposals to address the Democrats’ concerns to the House leadership, but Peterson said he has not seen them.

Farm leaders also spoke, repeating earlier statements that USMCA will provide farmers with new market access in Canada and Mexico while maintaining the zero-tariff platform they rely on.

The event, organized by Farmers for Free Trade, was chaired by former Sen. Blanche Lincoln, D-Ark., the spokesperson for the group.

Other groups that participated included:

-Distilled Spirits Council of the U.S.

Farmers for Free Trade has scheduled a roundtable at the Ronald Reagan International Trade Center on Friday for the agriculture groups to discuss the impact of USMCA on each sector. 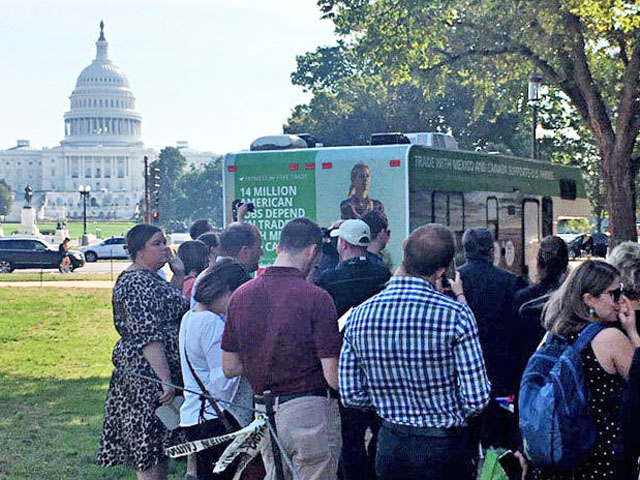