House Agriculture Committee Chairman Collin Peterson, D-Minn., said Monday that, while he is worried farm bill benefits will prove inadequate, the bill “is what it is.” Meanwhile, the National Farmers Union board called for a bigger package of assistance.

Appearing on the “Adams on Agriculture” radio show, Peterson said that, while he expressed concern before the farm bill passed in December that benefits would not prove generous enough in a period of low commodity prices and trade conflicts, “the farm bill is what it is. We are going to have to live with it.” Bankers, he said, are telling them they are “concerned.”

Farmers were able to offset the problem of low prices with big crops, but Peterson said that part of his district had poor crops last year.

Peterson added that he believes the dairy provisions “are adequate.”

But the National Farmers Union, the most Democratic-leaning farm group, announced Tuesday that its board of directors had passed a resolution urging the Trump administration and Congress to work together “to strengthen the farm safety net to help farm families weather the coming years.”

“Economic challenges have forced many farmers into significant financial strain, particularly beginning farmers and ranchers who have not had the ability to build up equity,” said the NFU Board. “Despite their best efforts, many farmers are struggling to stay afloat. We urge Congress and the administration to work together to find solutions that will provide significant, long-term answers to strengthen the farm safety net.”

Noting that ongoing disputes with China and other key trading partners caused further damage to U.S. agricultural markets, the NFU board said, “The short-term assistance provided through the United States Department of Agriculture’s Market Facilitation Program was appreciated but fails to provide long-term relief. Regardless of when and how existing trade disputes are resolved, it will take decades to overcome the self-inflicted damage to our markets.”

The NFU Board said the changes to Price Loss Coverage and Agriculture Risk Coverage for crops “will improve each program’s effectiveness and will eventually strengthen the levels of support they provide” while the “Dairy Margin Coverage program is a significant improvement over its predecessor, the Margin Protection Program." But it urged Congress “to examine options to meaningfully address chronic oversupply in the marketplace, which has been particularly damaging to U.S. dairy and grains sectors.”

In the podcast interview, Peterson also said that the committee will consider climate change issues if “anyone comes up with effective ideas.”

He also noted that the agriculture community had allied with environmentalists to write the legislation on biofuels and ethanol, but that cellulosic ethanol has not taken off and therefore the environmental support for biofuels has diminished.

Peterson also said that he would favor legislation that says Farm Service Agency offices could remain open during any future shutdowns because they are implementing mandatory farm programs. Peterson said FSA employees should be paid out of the Commodity Credit Corporation “or some other place” if there is another shutdown.

He noted that the law allowed the Natural Resources Conservation Service offices to remain open, but that farmers could not understand the difference. Peterson said he disagrees with the Office of Management and Budget decision that sent FSA employees home. The Trump administration agreed to open the FSA offices shortly before the shutdown ended. 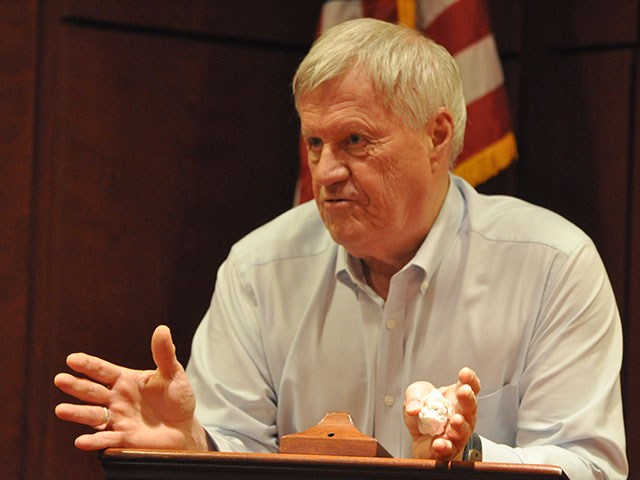