Those dang kids and their fancy foods.

In a hotel conference room Tuesday where old codgers outnumbered their youthful counterparts, Eve Turow Paul bounced on stage and energetically explained to these older food and ag industry veterans that she and her cohorts are about to run the show when it comes to the agenda on food.

No, Paul's not part of the Trump transition team. She's a millennial and in 2017 her generation will surpass those Baby Boomers as the largest spending group in the world.

And millennials have this strong need to experience food, know food, connect with the world through food and use food to identify a social status.

"Young people used to spend 17 cents on ramen (noodles) and now we are spending $25 on ramen and waiting for two hours to get it," Paul told the crowd at the Organic & Non-GMO Forum.

Millennials are running in the age group from 19-36 right now and account for more than 75 million Americans. The Pew Research Center noted last April that millennials had overtaken the Baby Boomers in population.

As Paul pointed out, millennials grew up with celebrity chefs, and they want to experience fine dining. In a survey she cited, 87% of millennials will splurge on a meal even when money is tight. They are far more willing to go out to eat on a given night of the week than their elders. Further, at least half of millennials call themselves "foodies."

While these people get anxiety disorders when their phones die -- nomophobia, look it up -- millennials at the same time gravitate to "anti-technology" when it comes to their food. Essentially, this generation is so wired in 24 hours a day to technology that cooking, eating, shopping for food and growing food becomes one of their few ways of feeling part of a community. That is such the case that there are now dining club apps and dining meetup apps just to experience a new restaurant with someone, even if it is a stranger.

"More than ever, we are using food as a way to tell us who we are."

That leads these young nosy bodies to want to know everything about their food, including how it is grown and who is behind how it is grown. "What you eat is not just about your diet, but who you are, what you are about and how others see you."

That also translates into identifying yourself by what you do not eat: gluten-free, vegan or paleo diet (rejecting all processed foods).

Further, Paul struck on a key point in noting, "Food is control." Millennials may feel they have had little control over their lives as a younger generation being led all their lives by the Baby Boomers, and to a lesser extent, Generation X. They grew up under the cloud of war and terrorism, suffered through a major recession that wasn't their doing and they will cope with the impacts of climate change that was not their doing. And they can establish control over themselves by dictating how they buy their food. They want non-GMO, home cooking, organic, gardening and comfort food.

So, in a mindset at least some Baby Boomers may remember from the 1960s, Paul said millennials are skeptical of big corporations including big food and big ag. "We don't trust the big guys." She added of her generation, "They don't trust these big companies that are saying 'Don't worry about it. Trust us.' "

Paul noted corporate America has caught on when it comes to food and transparency is becoming key. McDonald's is pitching "simpler is better" while a growing number of companies are pitching their sustainability platforms to millennials. Paul pointed out Walmart's latest sustainability goals rolled out this month. Those goals include doubling sales of locally grown produce and expanding sustainable sourcing to cover 20 key commodities.

"It will without a doubt have an impact on the agricultural system," Paul said.

The millennials and the younger Generation Z are focused more on the environment than they believe the older generation does. That is an opportunity for people in agriculture because there are so many things that farmers can go for the environment. "We're still going to have an appreciation for exotic foods and we're really, really concerned about the planet."

The coming game-changer for the food chain is research in "microbiomes" and around nutrient density in foods, Paul said. We're not far from people being able to use scanners in stores to test the nutrient density levels of foods. At that point, nutrient density of food should overcome the old supply chain mindset of focusing on yield and production.

"We live in a new reality now and it's time to consider what is the role of the supply chain, what is the responsibility of the farmer to this new population of the world that is ready and eager and clamoring for it?" she said. "Is the supply chain ready for the future?"

After her presentation I asked Paul if she had spoken to forums dominated more by commodity farmers. They are naturally very resistant to her message. "They often say, 'you just don't understand what we're doing.'"

But at least one major industry player on Wednesday agreed with Paul's assessment. Dave Brown, vice president of commodity price and risk management at the snack food giant Mondelez -- a spinoff from Kraft Foods -- pointed out declining sales in traditional processed snack foods. "She's right on about changing consumer trends," Brown said. He added later in his talk that organic healthier snacks are what interest that younger generation, but it is hard for a major commodity company to scale up its product line. "We would agree that's where the growth is."

More information on Eve Turow Paul and her book, "The Generation of Yum," can be found on her website, http://eveturowpaul.com/… 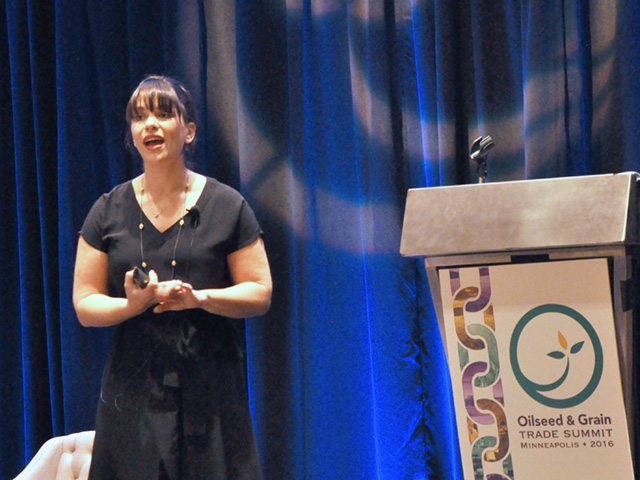