I can't help but think of Sawyer Brown's version of the George Jones classic "The Race is On" when I look at the July Kansas City wheat (KWN8) weekly chart. Why the former instead of the latter? It's faster paced, with the bass drum constantly beating in the background, emphasizing the song's race theme.

Take a look at the previously mentioned KWN8 chart, and you'll see why the Sawyer Brown version is fitting background music. So far KWN8 has posted a near picture perfect start to a 5-wave secondary (intermediate-term) uptrend. I stated in this blog on December 23 that the contract was in a secondary uptrend, though it was still not perfectly clear.

Wave 1 wasn't evident until it climbed to a new 4-week high of $4.70 3/4 (week of January 2). After posting a number of bullish crossovers below the oversold level of 20%, weekly stochastics had finally climbed above this level. So, how did KWN8 react to these bullish signals? By posting a bearish outside range, including a Wave 1 high of $4.71 1/4, the following week. Of course it did, it's wheat after all.

In most other markets such a move would suggest the previous downtrend is still in play, and KWN8 did indeed pull back to a low of $4.50 1/4 the week of January 16. But note that this was a test of support at $4.50 1/2, a price that marked the 67% retracement level of Wave 1, while keeping in mind it is usual for Wave 2 to retrace most of the previous wave. The contract's ability to close higher that week, up 2 3/4 cents at $4.58, set the stage for possible move into Wave 3.

How high might Wave 3 extend? The 38.2% level could cap the rally short-term, particularly given July KC wheat's seasonal tendency to post a high weekly close the first week of February. From there Wave 4 would be expected to fall back, with its eventual low theoretically staying above the Wave 1 high of $4.71 1/4. Given the still strong carry in the July-to-September futures spread (green line, bottom study), Wave 5 could be limited to a 50% retracement near $5.31 3/4.

The key will be the spread though. If it starts trending up (weakening carry), that means commercial buying is increasing on concerns over weather and crop conditions, all made more important by another year of near century low planted acres. It's possible KWN8 could pull extend its uptrend to a 61.8% rally near $5.53 1/4 before peaking. 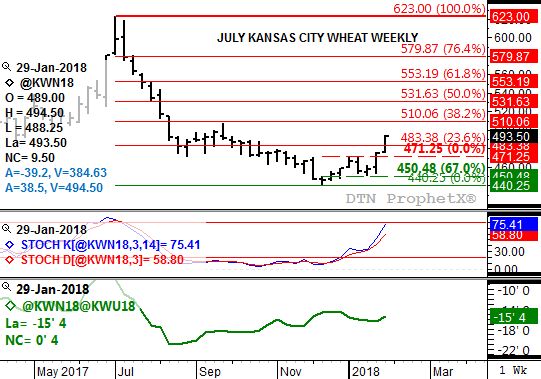