Time for a detour. Writing that last sentence prompted me to go back and look to see if I blogged on the USDX last January, similar to this post. Sure enough, I did. Funny thing is, though, the move to its new high to start the new month/new year sent this U.S. dollar bear into hibernation, replacing it with a reluctant bull talking about outlandish high targets like 109.00. Of course that blog marked the high for the USDX as it collapsed into a 2-month bearish reversal on its monthly chart, sending it reeling into the downtrend we discuss today.

Back to the present. September 2017 saw the USDX post a low of 91.01, a solid test of support at 91.17. This number marks the 38.2% retracement level of the previous major (long-term) uptrend from 70.70 (March 2008) through the January 2016 high. Given the sell-off over the course of the year showed little change in direction, I would be inclined to view the move as Wave A (first wave) of a standard 3-wave downtrend.

However, and this is key given what happened in 2017, monthly stochastics are already below the oversold level of 20%. As we saw early last year when stochastics were being led by a series of bearish crossover above the overbought level of 80%, the USDX could see downside momentum start to wane in early 2018 given its already oversold status.

For now, though, this dollar bear will remain bearish, believing that Wave C will take the USDX to a new low. Stay tuned for updates as 2018 progresses. 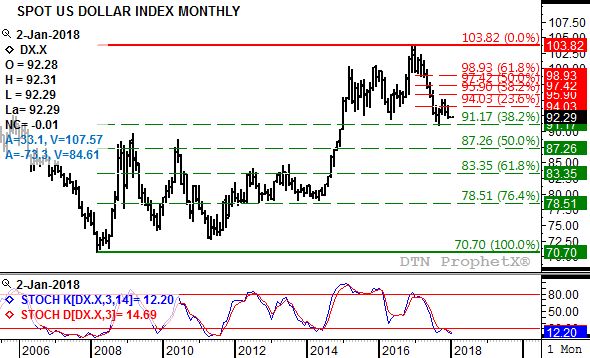