Feeder Cattle: The March contract closed at $142.675, down $11.50 on the monthly chart. The market looks to be in a major (long-term) sideways trend between support at $139.075 and resistance near $164.725. Monthly stochastics are bearish, but below thee oversold level of 80%. If the March contract falls through support it would suggest, by simple measuring techniques, an extended sell-off to test the previous major low of $114.65 (October 2016) if not lower.

Lean Hogs: The February contract closed at $71.775, up $2.00 on the monthly chart. The market has resumed its major (long-term) uptrend as the Feb contract posted a new 4-month high of $72.45 during December. Next resistance is up near $87.05, a price that marks the 50% retracement level of the previous downtrend from $133.425 through the low of $40.70. Monthly stochastics are bullish below the overbought level of 80%, indicating the market has some room to the upside.

Corn (Cash): The DTN National Corn Index (NCI.X, national average cash price) closed at $3.15 1/2, up 5 1/2 cents for the month. The monthly close-only chart shows the NCI.X near trendline resistance at $3.18 3/4 heading into January. With the major (long-term) trend still down and the NCI.X secondary (intermediate-term) uptrend nearing an end, the projected March low monthly close near $2.97 still looks like a strong possibility. 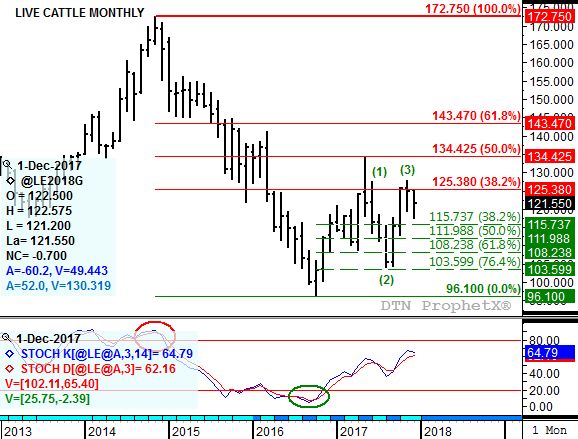