Feeder Cattle: The August contract closed $2.900 lower at $145.025. The contract's secondary (intermediate-term) trend remains down with a next target of $136.70. This price marks the 50% retracement level of the previous secondary uptrend from $109.90 through the high of $163.50. Weekly stochastics are still bearish.

Lean Hogs: The August contract closed $0.525 lower at $83.225 last week. August lean hogs are an interesting technical study, showing what looks to be a spike reversal following last week's activity. The contract posted a new high of $85.375, just short of the next major (long-term) target near $87.05, before closing lower for the week. Meanwhile, weekly stochastics are above the overbought level of 80% and nearing a bearish crossover. While the secondary (intermediate-term) trend hasn't changed direction yet, the contract needs to be watched closely for a bearish turn.

Corn (Cash): The DTN National Corn Index (NCI.X, national average cash price) closed at $3.47 3/4, up 13 cents for the week. Despite the strong rally the NCI.X remains in a secondary (intermediate-term) sideways trend on its weekly close-only chart. Resistance is at the previous high of $3.48 (week of June 5) and support the low of $3.19 1/4 (week of June 19). Despite last week's rally in the futures market, basis versus the September contract strengthened 1 1/2 cents to 44 3/4 (cents) under. 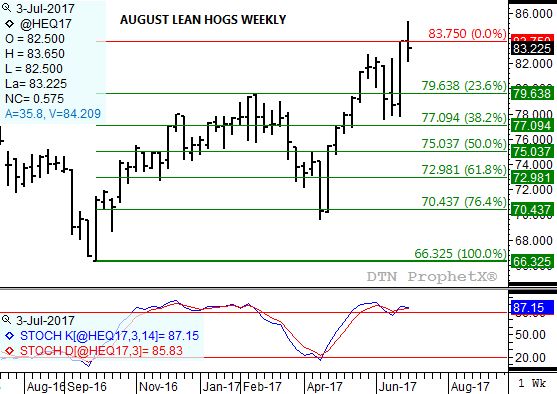