Brent Crude Oil: The spot-month contract closed $1.46 lower at $52.15. The market's minor (short-term) trend looks to have turned down, meaning its secondary (intermediate-term) downtrend could also resume. The spot-month contract rallied off minor its test of support at $50.66 to test initial resistance at $52.20. If this is Wave B (second wave) of a minor downtrend the contract could test next resistance at $52.66 or $53.13 before peaking. From there, Wave C would be expected to extend to at least next support at $49.71, then possibly $48.54.

Gasoline: The spot-month RBOB gasoline contract closed 0.97ct lower at $1.6426. The market's secondary (intermediate-term) trend remains sideways on its weekly chart while its minor (short-term) trend looks to have turned down last week. Daily stochastics established a bearish crossover above the overbought level of 80% at the close of Thursday, May 25.

Natural Gas: The spot-month contract closed 2.0cts lower at $3.236. The secondary (intermediate-term) trend remains down with the recent high of $3.431 looking to be the Wave B (second wave) peak of a 3-wave downtrend. If so the spot-month contract would be expected to take out the Wave 1 low of $2.521 over the coming weeks. 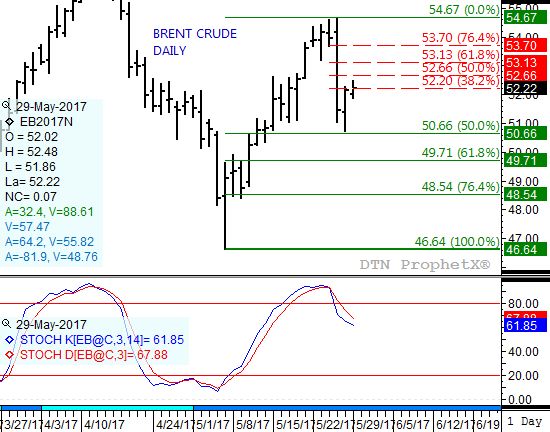