Live Cattle: The February contract closed $0.25 lower at $116.05. The market's secondary (intermediate-term) looks set to turn down. Feb live cattle posted a doji (candlestick pattern) on its weekly chart near resistance at $117.75, a price that marks the 50% retracement level of the previous secondary downtrend. A doji usually reflects indecision, and with weekly stochastics poised to establish a bearish crossover above the overbought level of 80% this indecision could lead to increased selling.

Feeder Cattle: The March contract closed $1.60 lower at $125.10. Similar to live cattle, March feeders look to be rolling over into a secondary (intermediate-term) downtrend. The contract posted a bearish reversal on its weekly chart, trading outside the previous week's price range before closing lower. All this occurred as March feeders tested resistance at $125.80, a price that marks the 50% retracement level of the previous secondary downtrend. While no bearish crossover was established by weekly stochastics, the momentum study is above the overbought level of 80% and in position for such a signal.

Lean hogs: The February contract closed $2.95 higher at $66.15 last week. The contract extended its secondary (intermediate-term) uptrend beyond resistance near $64.80. This price marks the 76.4% retracement level of the previous secondary downtrend from $70.125 through the low of $47.525. The contract also posted a bullish outside range, indicating it could move closer to a full retracement of its previous trend despite weekly stochastics already showing an overbought situation.

Corn (Cash): The DTN National Corn Index (NCI.X, national average cash price) closed at $3.15 1/4, up 8 cents for the week. The secondary (intermediate-term) trend could still be considered up with initial resistance at the 4-week high (weekly close) of $3.17 1/2, then near $3.23 1/2. The latter price marks the 33% retracement level of the market's previous secondary downtrend from $4.00 1/2 through the low of $2.85 1/4. The last secondary signal by weekly stochastics was a bullish crossover in conjunction with the previous low. This gives the market the opportunity to test resistance levels before establishing a new secondary downtrend.

Soybean meal: The March contract closed $5.00 higher at $316.60. March soybean meal remains in a secondary (intermediate-term) sideways trend between resistance at $332.80 and support at $309.80. Weekly stochastics remain neutral, making a test of support possible over the next few weeks. 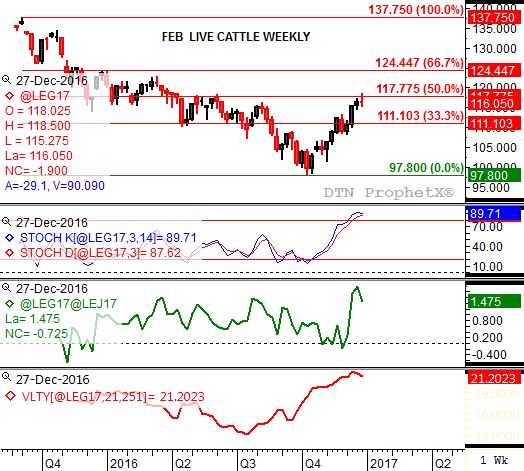