Brent Crude Oil: The spot-month contract closed $0.13 lower at $54.33. The secondary (intermediate-term) trend remains sideways-to-up, with the spot-month contract testing resistance between $53.38 and $55.47. These prices mark the 61.8% and 67% retracement levels of the previous secondary downtrend from $69.63 through the low of $27.10. However, the major (long-term) trend remains up on the monthly chart and could continue to override previous bearish secondary signals.

Distillates: The spot-month contract closed 2.07cts lower at $1.6374. Similar to both crude oil markets, the major (long-term) uptrend has overridden previous bearish signals on the secondary (intermediate-term) weekly chart. However, the spot-month contract is nearing next major resistance at $1.6883 while monthly stochastics have crossed above the overbought level of 80%.

Ethanol: The spot-month contract closed 1.3cts higher at $1.683. The market remains in a secondary (intermediate-term) uptrend with the spot-month contract above resistance at $1.650. This price marks the 76.4% retracement level of the precious secondary downtrend from $1.739 through the low of $1.296. Weekly stochastics have climbed above the overbought level of 80%, possibly limiting new buying interest. However, the market's major (long-term) trend remains up with resistance at $1.712 then $1.884.

Propane (Conway cash price): Conway propane closed 3.00cts higher at $0.6100. The market's major (long-term) uptrend has helped reestablish a secondary (intermediate-term) uptrend on weekly charts. Next major resistance on the monthly chart remains at $0.6621, a price that marks the 33% retracement level of the previous downtrend from $1.4825 through the low of $0.2525. 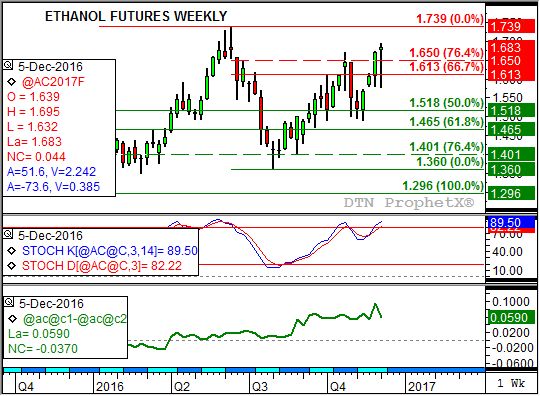