Lean hogs: The February contract closed $7.525 higher at $61.55 last week. The market's secondary (intermediate-term) uptrend continues to strengthen. Feb hogs tested resistance at $62.60 last week (high of $62.425), a price that marks the 67% retracement level of the previous secondary downtrend from $70.125 through the low of $47.515. If the contract can break this resistance, and given weekly stochastics are still bullish and below the overbought level of 80%, then a full retracement of the previous downtrend is possible.

Corn (Cash): The DTN National Corn Index (NCI.X, national average cash price) closed at $3.17 1/2, up 14 1/4 cents for the week. The secondary (intermediate-term) trend remains up. However, with weekly stochastics moving above the overbought level of 80% last week additional upside could be limited. Next resistance is between $3.23 1/2 and $3.29 1/4, prices that mark the 33% and 38.2% retracement levels of the previous secondary downtrend from $4.00 1/2 through the low of $2.85 1/4. Seasonally the market tends to post an initial peak (weekly close only) the third close of December, or this coming Friday.

Soybean meal: The March contract closed $7.30 higher at $322.90. The secondary (intermediate-term) trend remains up. However, March meal has been unable to breach resistance at $332.80 after testing this level four out the last seven weeks. This price marks the 38.2% retracement of the previous secondary downtrend from $389.80 through the low of $297.60. The combination of still bullish weekly stochastics and an increasingly bearish carry in the March-to-May futures spread could result in another test of this same resistance over the coming weeks. 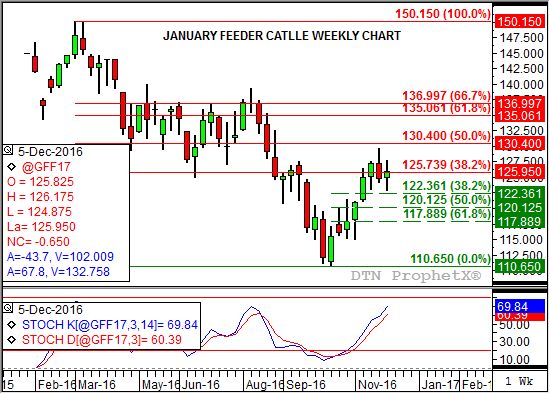