Lean Hogs: The October contract closed at $59.05, down $24.225 on the monthly chart. October hogs are sharply oversold on its weekly chart, indicating the secondary (intermediate-term) downtrend could soon come to an end. If so this would also mark the end of Wave 2 of the major (long-term) 5-Wave uptrend that began on the monthly chart with the June 2016 peak of $90.425. A normal Wave 2 tends to see nearly a full retracement of Wave 1, in this case starting with the Wave C low of $51.80. However, no bullish crossover has been established on the October weekly chart to this point indicating the secondary downtrend has come to an end.

Corn (Cash): The DTN National Corn Index (NCI.X, national average cash price) closed at $3.05 1/2, down 20 3/4 cents for the month. Trends analysis is complicated in cash corn. While the argument could be made that the NCI.X remains in a major (long-term) 5-Wave uptrend, with the ongoing secondary (intermediate-term) downtrend amounting to a Wave 2 retracement, the market also looks to be in a major sideways pattern between the October 2014 low of $2.18 1/2 and the July 2015 high of $4.05 3/4. Both weekly and monthly stochastics are below the oversold level of 20%, hinting at a possible end to the Wave 2 sell-off in the coming month(s). 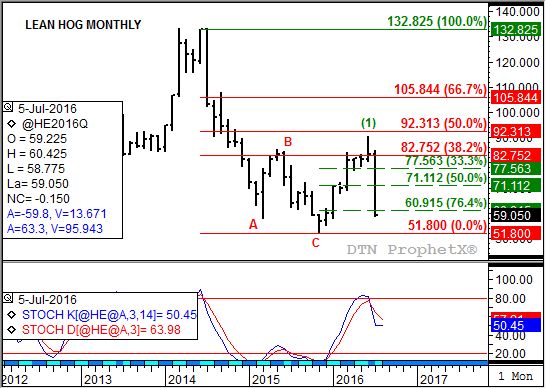