Cotton: The December contract closed at 74.04, up 9.87 on the monthly chart. The market finally confirmed bullish monthly stochastics signals, breaking out if its major (long-term) sideways trend and turning up. Initial resistance is now pegged at 80.93, a price arrived at by adding the range of the previous sideways range of 11.43 (between 68.48 (red dotted line) and the previous major low of 57.05) to the breakout point of 68.48. Monthly stochastics are approaching the overbought level of 80%.

Coffee: The September contract closed at 146.20, up 2.10 on the monthly chart. The major (long-term) trend remains up, with initial resistance pegged at 169.31. This price marks the 33% retracement level of the previous downtrend from 306.25 through the low of 100.95. While monthly stochastics remain bullish, a strengthening carry of the market's forward curve could limit its uptrend to the 33% retracement level.

Cocoa: The September contract closed at $2,835, down $128 on the monthly chart. The market remains in a major (long-term) downtrend with the more active September contract below initial support at $2,877. This level marks the 38.2% retracement level of the previous uptrend from $1,983 through the high of $3,429. Next support is at the 50% retracement level of $2,706.

Sugar: The October contract closed at 19.05, down 1.10 on the monthly chart. The market established a major (long-term) downtrend at the end of July after posting a new high of 21.10. The lower close led to the establishment of a bearish crossover by monthly stochastics above the overbought level of 80%. The initial downside target is 17.45, a price that marks the 33% retracement level of the previous uptrend from 10.13 through the July high. However, strengthening carry in the nearby futures spread would suggest an extended downtrend to the 50% to 67% retracement levels, putting the long-term target area between 15.62 and 13.78. 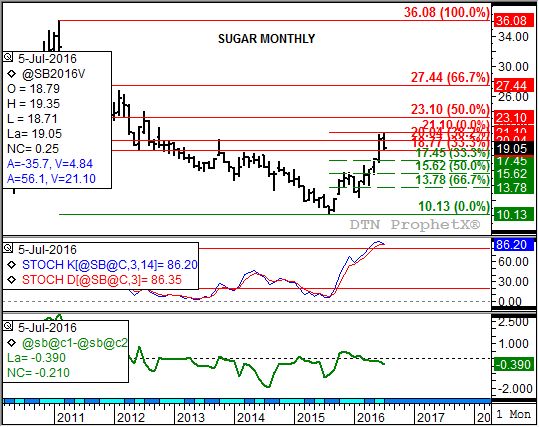