Those that stay up late at night are sometimes treated to celestial fireworks like lunar eclipses, shooting stars, or interesting planetary alignments that haven't been seen since the dawn of time. It's been decades since I've been one of that category, instead, like many of you, getting up well before dawn every day to watch global markets. So what were we treated to early Friday?

Had weather forecasts changed? No.

Had something happened overseas to change the market's fundamentals? No.

Was something extraordinary happening in outside markets? Again, no.

So what happened? It was simple, funds (who) sold (what). Computer algorithm sell signals were triggered by any of a thousands of possible reasons, leading to the flash crash in the grains complex. By the time the overnight session closed at 7:45 CZ6 was 1/4 cent above Thursday's close and SX6 was down "only" 5 1/2 cents. But that two-hour period likely caused someone a great deal of pain, particularly if some long-forgotten open orders were triggered, while others had no idea it had even happened.

Aside from the point there seems to be no explanation for this latest flash crash, the move also highlights the increasingly valid idea that if you're going to watch price charts, focus on those that track the close only. It takes away the noise, and images that can't be explained by flashes.

Later in the day I was visiting with DTN Policy Editor Chris Clayton. Through a series of emails, the DTN newsroom was discussing the early morning events and Chris was going to contact folks at both the CME and CFTC to see if anyone had an explanation. My initial reply to him was that the information he would get form either fit in the set including zilch and nada. As it turned out, that's basically what they offered.

But remember, the why isn't important. And we won't likely ever know it.

In the grand scheme of things, did Friday's early morning move change anything? No. Trends were down on weekly charts before and were still down afterward. Trends on long-term monthly charts remain sideways. It looks to be no more than a minor anomaly, or as DTN Analyst Todd Hultman called it, "oddly bizarre".

Then again, that would apply to anytime one gets flashed. 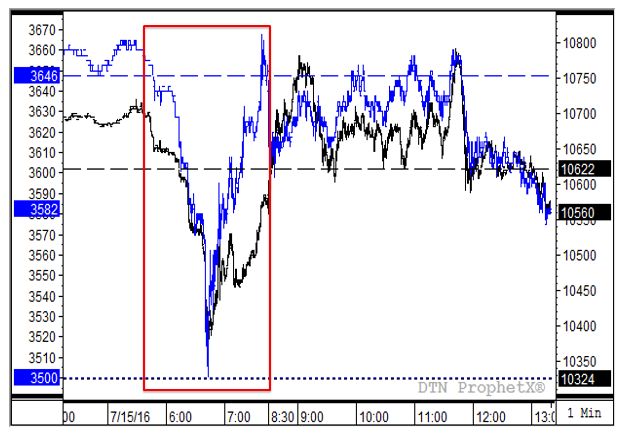