First let me say "Thank you" for all the participation in Monday's blog. There are a number of good technical analysts out there that saw a number of patterns that I look for as well. Responses touched on basic trendline support and resistance to the slightly more complex Elliott Wave theory. Others noted volatility as the list of possible markets started to be trimmed to something in the global oilseed complex.

In fact Market X was the DTN National Soybean Index (NSI.X), its value multiplied by 10 to provide a disguise. It remains one of my favorite charts because one doesn't have to know the underlying fundamentals to see what the market is telling us. Here's my breakdown of where the NSI.X stands this morning:

If we add some Dow and Fibonacci retracements to our Elliott Wave we see this trendline resistance falls between the 33% level (Dow) of $11.14 and the 38.2% (Fibonacci) mark of $11.60. A close look at the trendline shows that it crosses these retracement levels between July and September 2016 (green circle). Therefore the NSI.X, despite Monday's sell-off, looks to have time to complete Wave 1.

Has the long-term low been established? Yes, I think so. If the NSI.X starts to pull back initial support would be between $10.28 and $9.72, the 33% and 50% retracement levels of the projected Wave 1. However, Wave 2 often sees nearly a full retracement of Wave 1 before bottoming out. Notice that Wave 2 from April 2004 through September 2004 saw the NSI.X retrace roughly 85% of Wave 1.

Again, I appreciate your responses. The bottom line of my analysis is the market is in a long-term uptrend while approaching an intermediate-term downturn starting the next couple of months. 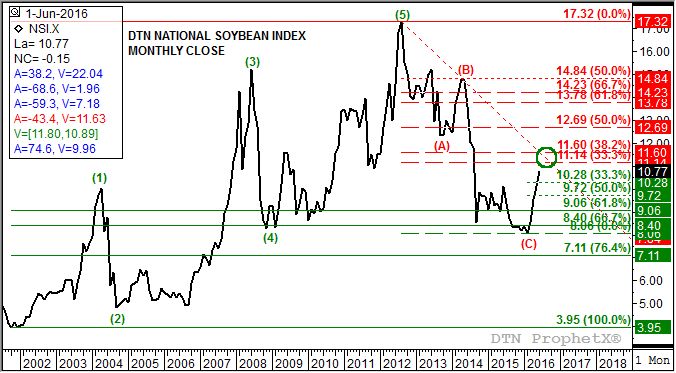