I should have known something was up when my husband started rubbing his eyes two-fisted like a toddler. Watering, red and nearly swollen shut, he struggled for weeks with weeping eyes.

And, despite my insistence ... alright, "my nagging," he refused to seek medical help. Thankfully, eventually, we seem to have come through the incident, but the road to recovery was rocky and led to some interesting discoveries about a weed I knew little about.

It's called wild parsnip and as I learned, the sap from the plant is one you want to avoid.

Let me be clear that poison ivy and poison oak are no problem for my husband. This guy has worked in lawn care for decades and is forever pulling those two offenders with bare hands and sticking both weeds in his pockets to save those sensitive to the weeds from encounters.

I also like to think that I'm no nervous Nelly. I'm accustom to his smashed fingers, welding burns, splinters and stings when he mows over a bunch of ground bees. I've stitched up animals and a few people. All that said, this eye thing was excruciating to watch. I mean, there's something about your eyes -- you don't take chances with them.

What started with red, swollen eyes, eventually spread into red burn down his cheeks. Oddly, it never did form a rash on top of the skin, but a skin discoloration crept across much of his face. Benadryl and eye drops helped control the itching and redness. But a return to the sun would set off a new wave of irritation.

Here's the deal -- if this man didn't want questions and answers, he shouldn't have married a journalist.

I interviewed him about his activities and that resulted in hand waves of over there and possible scenarios when he wasn't dabbing at his eyes. That led me to call some weed scientists and then, I took a field trip to where we thought the incident started. There, I found what I thought might be the culprit in a weed patch containing some wild parsnip.

With a resolute no to a doctor visit, I did the best I could -- googling, calling and interviewing weed specialists. You can read what I learned here: https://www.dtnpf.com/…

Am I confident in my diagnosis of what caused the issue? I can only say that I learned a lot about this weed and was shocked to find it so easily along roadways. I was surprised at what it can do. I don't want anyone else to go through this.

My theory is that Jay lucked out in that it was cold that day and he had arms covered with long sleeves and was wearing gloves. As I learned, it takes sap and sunlight to activate the wild parsnip chemical reaction.

Jay confessed the weeds were tall and after mowing there was enough vegetation on and under the mower that he used a backpack blower to blow off the residue. Maybe that kicked a drop of sap into his eye? He wears glasses, so maybe that helped?

University of Wisconsin weed specialist Mark Renz told me it is not unusual to hear that those working on mowers have experienced burns as they unwittingly come in contact with the sap.

Why am I writing this personal account? It's a warning to watch out for this troublesome weed. I was told that it is not common in our area, yet I found plenty of it in central Illinois. It's pretty enough that someone might pick it unsuspecting the outcome. I've seen lots of awful online pictures of those who have suffered blisters and burns.

But here's another plea ... don't be afraid or reluctant to seek help. It's a bit of a joke at our house now that he seems to be out of the woods, but our dog had a scary encounter with ground hornets during the same period of time. She had a bad reaction and was promptly taken to the vet and received treatment. Yet, we aren't willing to do the same for ourselves?

And, yes, I told my husband I was writing this and that my final line would be: If someone loves you enough to be super worried about your welfare, then maybe check into the problem for their sake. Or, you could do it just to avoid the drama and nagging!

For some good resources on wild parsnip go to:

Previous Post (More Soybean Farmers Rotating SCN Varieties)
Next Post (Getting the Rain Shaft -- Why Isn't it Raining in My Field?) 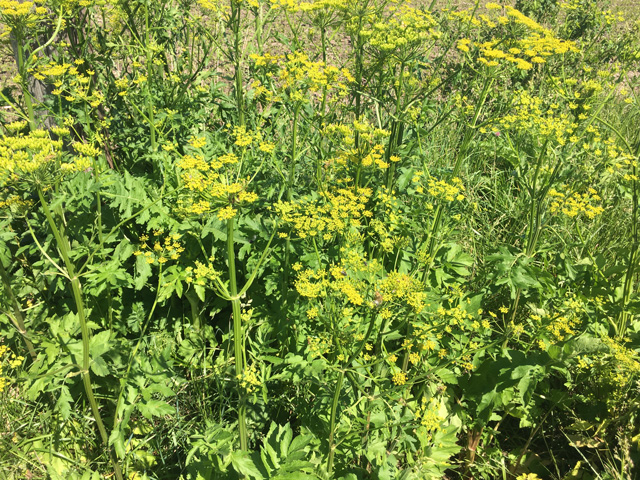