USDA released its first spring crop condition report of the year for the 2020 U.S. winter wheat crop with 62% of the crop rated either in the good or excellent categories compared to 60% last year.

This year's crop improved during its winter dormancy period due to much better precipitation in the southern and central Plains.

The first fall rating given back in late October showed 56% of the crop either in the good or excellent categories falling to 52% by the time the last condition report of the year was released in late November.

This graphic shows the first fall, last fall and first spring rating of the year vs. the percent that the May yield estimate deviated from the 30-year trend of the final yield.

The fact is there is a lot of time between now and when the crop is harvested in the June/July period.

From what we have learned over the years is what kind of conditions in terms of heat and moisture the plants will have to endure in the spring, especially during the critical reproductive phase are most important for yield determination.

Note that the correlation between the first fall rating and percent yield deviation is poor, improves just slightly for the last fall crop rating which is usually around the first week of December, but then the correlations really jump for the first spring rating made at the beginning of April. 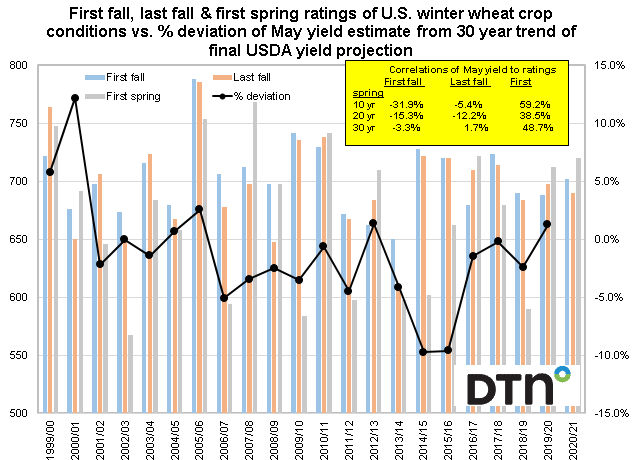