The USDA will issue its February WASDE report next week and though this is usually one of the more subdued supply-demand releases of the year, news that the World Agricultural Outlook Board (WAOB) will take into account the Phase 1 and USMCA trade pacts into their analysis has some looking for more positive export projections.

We suspect however that there will be more trade interest in the USDA's initial take on the 2020-21 balance sheets for the major crops that will be unveiled at their annual Ag Outlook Forum later in the month.

The question we have is how much attention should be paid to these early season projections, especially with the nation's corn and soybean crops not even planted?

And are they even in the ballpark when the USDA starts to issue the balance tables for new crop in the May WASDE?

We looked at the average percent change in the USDA forecasts for U.S. corn, soybean and wheat production, total use and ending stocks from their initial estimates at the February Agricultural Outlook sessions to the February WASDE estimates one year later covering the period 1998/99 to 2019/20.

The only exception is we use the January 2020 WASDE figures for the 2019/20 season as compared to the projections given for the 2019/20 marketing year at the February 2019 USDA Outlook Forum.

For corn, the final production figure averages about 1.1% below what USDA forecast a year earlier, while corn usage as of February is about 0.3% below what was estimated at the Ag Outlook sessions.

The biggest miss is in ending stocks as of the February WASDE, 6.2% higher than what had been projected, suggesting USDA is consistently being too optimistic on corn demand.

For soybeans, the February WASDE figures a year after the Outlook estimates average 0.7% too low on production, 1.5% too low on usage resulting in ending stocks 3.0% below what had been projected.

As for wheat, the February WASDE numbers tend to average 1.1% higher than the Outlook projection for production, 0.6% higher for usage and ending stocks tending to be 4.7% greater than what was indicated about 12 months prior.

The standard deviation of these differences shows the greatest variability for ending stocks, often due to some weather problem that pares production below what was expected.

The USDA Ag Outlook normally assumes average weather and some sort of demand shock that could be linked to a macroeconomic event such as a recession that pares demand or perhaps a weather problem in another part of the globe that helps boost U.S. overseas sales.

Regardless of their accuracy, the USDA's Feb Outlook projections certainly give market participants something to chew on as we get ready for a new growing season.

Keep in mind also the final WASDE figures in November can differ dramatically from what is indicated in the February report issued nine months earlier. 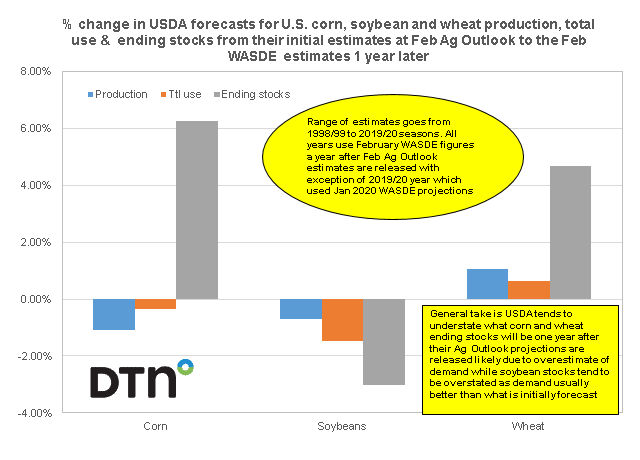