In prior posts we have talked about the long-term decline in corn used for feed as this year's 5.275 billion bushel (bb) projected figure is pegged as the lowest in five years.

To be truthful, the demand component is known as the feed/ residual figure since it is sort of a catch all category with feed demand backed out of supplies after export and food-seed-industrial usage is subtracted out of the quarterly stock figures.

Residual use is often tied into the crop size with a large crop meaning a large residual and vice-versa so with record crops in recent years this implies actual feed demand is even less than it should be.

Since then however the surge in corn prices linked to our renewable fuels polices, weather induced crop shortfalls, rising demand and other factors collapsed corn used for feed to as low as 4.315 bb in the 2012/13 marketing year.

Though usage has since rebounded, it has not come anywhere close to levels seen 15 years ago despite a steady increase in grain consuming animal units (GCAU).

Reasons offered for the drop in corn fed include increased use of corn derived byproducts such as corn gluten feed (CGF) and distillers dried grain (DDG), larger amounts of wheat being fed in the SW Plains areas with wheat prices very cheap in recent seasons and superior genetics resulting in higher feed efficiency rates than seen in the past.

Note that corn prices are still a major determinant of feed demand and with corn prices recently at six year highs for this time of year feed feed/residual usage is seen down 6.1% vs. year ago levels.

The attached graphic shows a scatterplot of the metric tons of corn fed per grain consuming animal unit vs. the average farm price of corn and this relation explains about 84% of the variability between these two variables. Looking at the graph it appears that the estimated corn to be fed is rather light with the equation suggesting it should be closer to 5.60 bb vs. 5.275 bb so we will see. 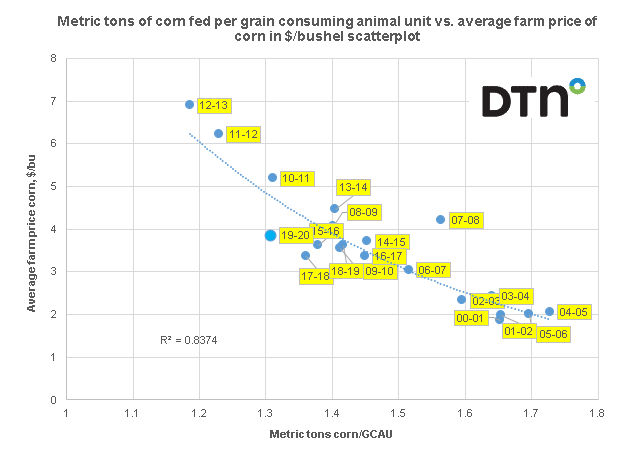