The USDA will release its quarterly stocks report on September 30 and we see the average trade estimate is a figure of 2.428 billion bushels (bb), slightly lower than what the USDA pegged 9/1/19 corn stocks in its September 2019 WASDE projection at 2.445 bb.

We actually think final 2018/19 corn stocks will come in higher than that linked to less feed use in the June-August 2019 quarter than the USDA is estimating based on some very cheap wheat fed in Southwest feed areas for recall during that period Kansas City wheat futures had moved to 14 year lows.

Tthe 12/1/18, 3/1/19 and 6/1/19 corn stocks figures have all been higher than expected, implying the feed consumption figure was inflated though it very well could be that the 2018 U.S. crop was understated and if that is the case the USDA will revise that figure on Monday.

Along these lines, this graphic shows the change in USDA's old crop feed/residual usage and ending stocks from the September to the October WASDE reports in million bushels (mb) on the left hand axis.

On the right hand axis is the change in old crop corn output from the final figure given in the annual crop production report released in January to the revisions, that if made, are given the same day at the end of September when the small grains summary and quarterly grain stocks in all positions as of September 1 are released.

As this is the one figure that attempts to quantify the amount of corn fed during the various quarters as a higher than expected 9/1 number implies less corn fed than expected and often results in a lower feed projection in the old crop October corn balance sheet and a higher ending stocks figure.

Keep in mind there are some rare instances where a revision in the ending stocks from the September to the October report are linked to a revised corn production figure.

Then there are years where downward revisions in corn production such as in 1998 and 2014 result in lower than expected ending stocks, though over the past 30 years there have only been three seasons where final corn production was revised down by any appreciable degree. 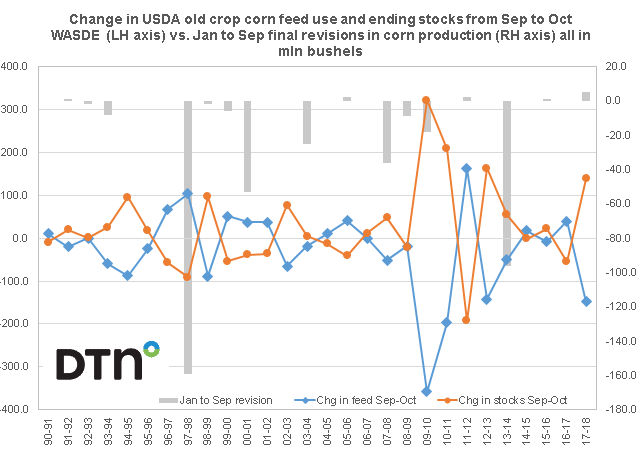