As has been the case for the past number of years, price action for the major grain and oilseed contracts was rather desultory in the month of August.

December corn lost about 41 cents for the month, November soybeans were off by 12 cents and December Kansas City wheat tumbled by 44 cents on the way to 14 year lows.

This graphic shows the August price action of December corn, November soybeans and December Kansas City wheat in dollars per bushel since 1995.

We have records going back to 1990 and last month's 41-cent (10.0%) price drop in December corn appears to the largest decline since then and perhaps ever for that contract in the month of August.

As for soybeans, the 12-cent drop last month was actually the most modest decline for a November soybean contract in the month of August since 1992 when a nine-cent loss was recorded.

In recent years August has not been too kind to the bulls as this marks the fifth year in a row that all three major crop prices have declined in August with December corn and November soybeans closing lower the past six Augusts in a row. 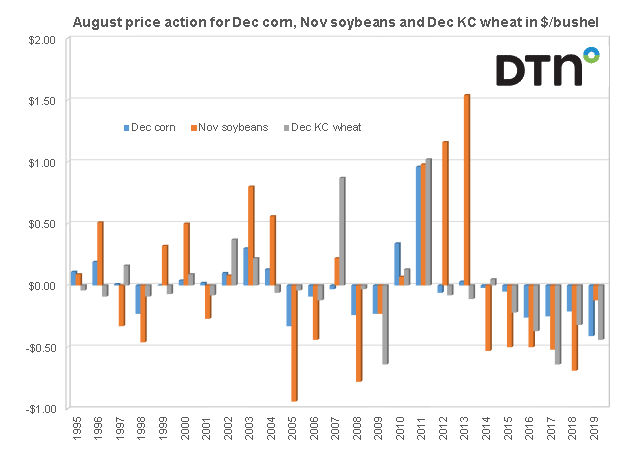