Similar to what we did with corn, this graphic shows the percent of the U.S. soybean crop planted by May 19 going back to 1980 on the left hand axis.

The fact that corn plantings are at their slowest point ever as of May 19 at 49% implies that 2019 soybean seedings may exceed the 84.6 million acres that were reported on the end of March USDA prospective plantings report as this is a crop that can be put into the ground later in the year.

News that the Trump administration is considering payments of $2 per bushel for soybeans but only 4 cents per bushel for corn as part of a package of up to $20 billion to offset farmers' losses from the trade war with China, (basing payments on the acreage farmers plant this year and their historic yield of crops per acre) could also keep farmers planting soybeans even though seedings of that crop this year are the slowest in 23 years.

Interestingly, as opposed to corn where all the really late planted years such as 1983, 1993, 1995 and 2013 featured both acreage declines from the March intentions to the final production report and below trend yields, such is not the case for soybeans.

The correlation between that May 19 planting date and yields is an even lower 6.3%. 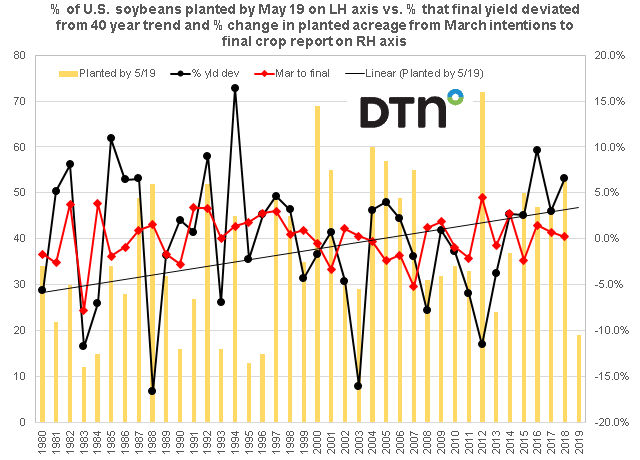