In a prior column, we showed the change for U.S. corn ending stocks, production, domestic use and exports in million bushels (mb) from USDA's February Agricultural Outlook Forum projections usually released the third week of February to the 1st WASDE report of the year given in May.

We surmised that given a deteriorating demand outlook this and next year along with higher intended planted acreage than expected it is very easy to project ending corn stocks next year almost 800 mb higher than the 1.650 billion bushel (bb) carryout the USDA projected just seven weeks ago.

This time we look at soybeans and show the change for ending stocks, production, crush and exports also from the Feb Ag Outlook forum to the first new crop WASDE report given in May.

Recall in February at their annual Outlook Forum, USDA pegged next year's soybean ending stocks at 845 mb based on planted acreage of 85 million, a yield of 49.5 bpa, beginning stocks of 910 mb, export demand at 2.025 bb and a projected crush at 2.105 bb.

The latest WASDE report had beginning stocks little changed at 895 mb and the forecasted crush is very close to this year's 2.100 bb.

The 03/29 prospective plantings report for soybeans however at 84.6 million is likely to increase given the real prospect of some intended corn acreage not getting seeded due to wet soil conditions with that ground perhaps seeded to another crop that can be planted later in the season such as soybeans.

Perhaps the most unknown figure is the export projection which is 150 mb higher than currently forecast for this year and in light of the continued impasse in the U.S.-China trade negotiations, along with a near 500 mb increase in South American production, this looks rather optimistic. 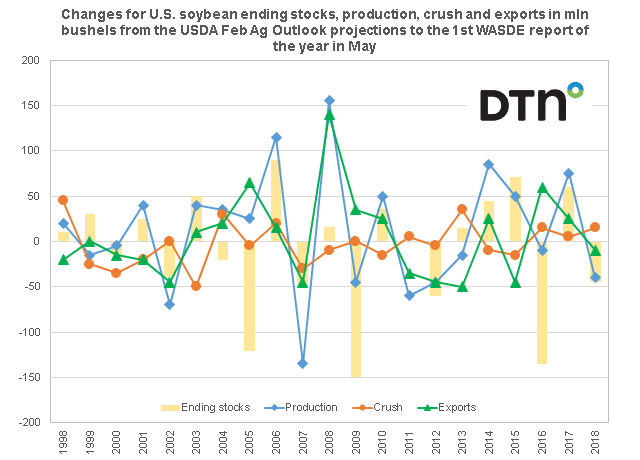