At the end of the month, USDA will release the Prospective Plantings report after they survey thousands of farmers on what mix of crops they "intend" to put in the ground.

This piece shows the change in 1000 acres of the corn, soybean and wheat planted area figures from USDA's annual Agricultural Outlook Forum that takes place in late February to the end of March prospective plantings report.

Note that the USDA Outlook projections given last month pegged corn acreage at 92.0 million acres, soybeans at 85.0 million and wheat at 47.0 million.

The attached graphic shows that the changes in corn and soybeans are much larger than those for wheat given that over two-thirds of the wheat seeded in the U.S. is the winter wheat varieties that are planted during the fall.

In fact, the standard deviation between the two acreage estimates are highest for soybeans, then corn and finally wheat.

A look at the range of changes from 1998 to 2018 shows that on average corn acres decline by 0.27% from the Ag Outlook projections to the prospective plantings report, increase by an average of 0.40% for soybeans and decline by 0.24% for wheat.

This year would seem to present more challenges than in the past given the flooding in the Midwest where recent rains on top of record snowfall this past winter and weeks of below normal temperatures suggests a high likelihood of some intended corn ground not getting planted, and perhaps instead seeded to soybeans.

The same argument could be made about the spring wheat sown in the Northern Plains and Upper Midwest.

Adding to the uncertainty are the ongoing U.S.-China trade talks that seem to have the greatest impact on soybeans as some say that with record U.S. stockpiles of that oilseed along with the arrival of new crop supplies from South America, futures and forward cash soybean prices should be trending lower to discourage U.S. farmers from seeding that crop.

New crop soybean futures near $9.50 per bushel, a SX9/CZ9 ratio of 2.38 and bankers telling their farm clients to reduce their expenditures and perhaps plant a cheaper crop than corn suggest otherwise. 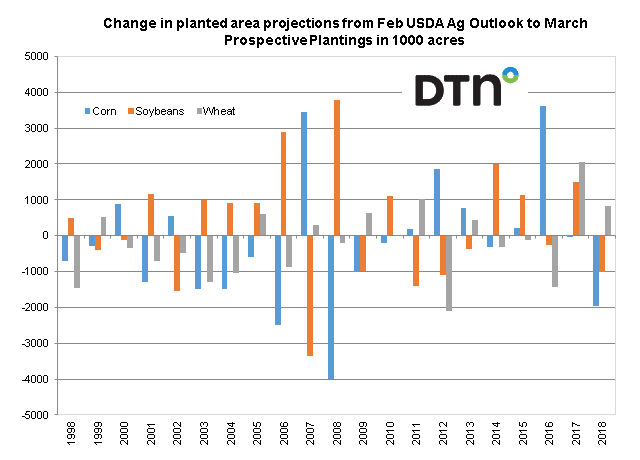