At that time there were only two states that were dry and one of them, North Dakota, was just slightly dry with Colorado the only one to be experiencing drought conditions.

Recall that the Palmer Drought Severity Index (PDSI) is the monthly value (index) that is generated indicating the severity of a wet or dry spell.

At that time, we noted that all the other states are above the zero mark, some exceptionally so.

What had been looked at favorably with almost all states in very good shape soil moisture-wise heading into the spring is now being seen with more trepidation as heavy precipitation continued into February, and now there are widespread concerns about delayed spring plantings throughout the key growing regions of the U.S. and a high likelihood of flooding.

All but 4 of the 21 states which include LA, NC, PA, and TX saw PDSI readings increase and now seven have their highest end of February PDSI ratings since at least 1960 and ten have readings indicating severe wetness or more so all the hand wringing about a wet spring and its negative ramifications appear justified. 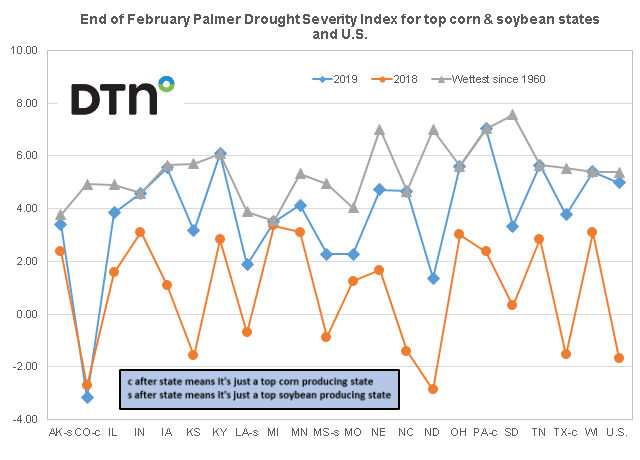