In a piece done recently, we note that U.S. row crop yields have been very good over the past few years where the respective five year rolling average of percent deviations from the 1970-2018 trend for soybeans is plus 4.5%, the highest ever and corn at plus 3.0%, the most positive differential since 1982.

This follows up on some reports we have seen noting that Midwest farmers would be hurting even more financially than they are were in not for the spectacular yields seen in recent seasons.

Given this backdrop, we again look at the five-year rolling average of percent deviations from the 1970-2018 trend for each of the top 18 corn producing states.

We also have the highest and lowest five-year averages from the period 1974-2018 as depicted in the accompanying graphic.

First observation is that for most states, it has been a nice five year stretch with the average percent deviation as high as plus 9.0% for Illinois to as low as a negative 7.0% for Colorado.

CO actually joins Kansas (-1.4%) and Texas (-1.1%) as the only 3 of the 18 states that have negative five year rolling average deviations, indicative of less ideal growing weather in the Plains states as opposed to the Corn Belt region.

In addition to 15 of the states having positive five-year rolling average deviations, four states appear to have some of their highest readings since 1975. 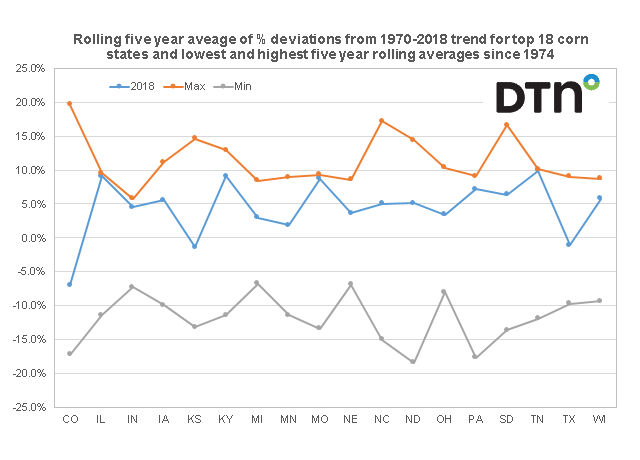