USDA pegged the 2018 U.S. corn yield at 178.4 bushels per acre (bpa) in its initial field-based crop production report and this is a new record exceeding the year ago high of 176.6 bpa and above the average trade guess of 176.2 bpa.

Earlier in the season, trade was thinking that corn yields could be this high with some guessing over 180 bpa but concern about elevated temperatures for much of the summer, dry spots in a number of key states and a decline in what still are historically lofty crop ratings had tempered some of the yield estimates.

Given talk that corn yields in the top three producing states were quite good it is no surprise that the USDA national yield is at a record high.

In fact, 11 of the top 18 states have yields above their respective 25 year trend.

At the opposite end of the spectrum, Texas has the lowest yield of the top states at 115 bpa followed up by North Carolina at 120 and then Kansas at 129.

In terms of deviation from trend, Texas also has the lowest in this regard at off 15.8% followed up by Missouri at off 14.5%.

Drought-stricken Missouri lags its year ago yield by the largest margin of any state, off 22.9% followed up by Texas where its 2018 yield is down 17.9% from its final 2017 yield. 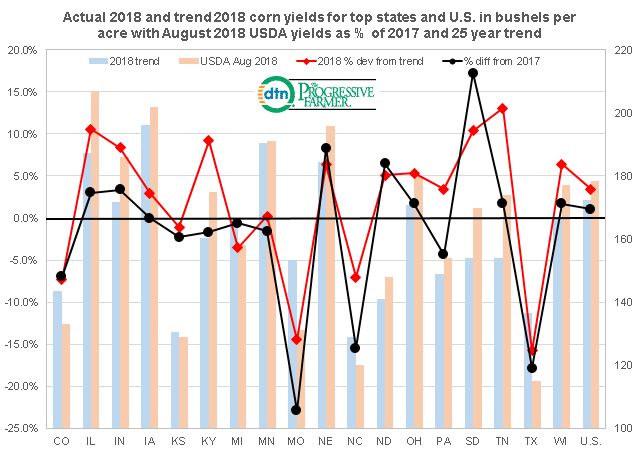