This week's came in at 70% good or excellent, fueling talk of high, if not record, yield potential.

Using our usual ratings system (where we weight the crop based on the percent in each category and assign that category a factor of 2 for very poor, 4 for poor, 6 for fair, 8 for good, and 10 for excellent and then sum the results), the highest rated crop is in Nebraska at 814; the Cornhusker state is also top rated in corn.

Other top ranked states include WI at 804, IA at 784 and ND, MN and IL all at 780 as the more northern states appear to be doing quite well this season.

We note however that for a crop seen as having record yield potential, not one of the 18 states has their highest ever end of July ratings, though only four (KS, MI, MO and NC) have their 2018 rating below their respective 1986-2017 average, whereas in corn six were below this threshold.

Nebraska again leads in this category with their end of July rating this year 11.7% above its long-term average.

The worst rated crops are in KS, MO and MI all due to very dry weather and NC is also in that category, though excess precipitation appears to be the cause there.

The Kansas crop is the worst one relative to its average at down 12.6% 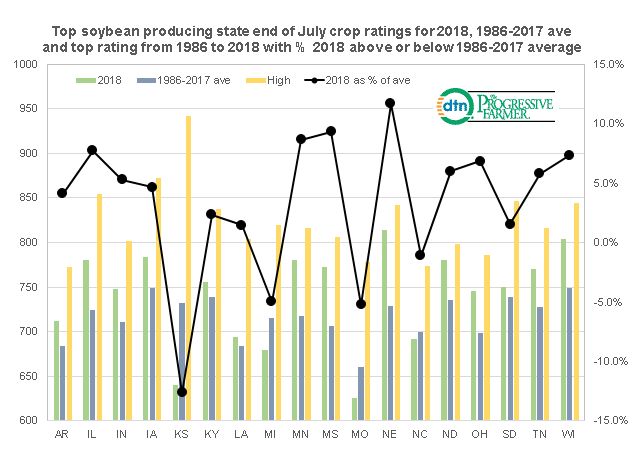